Apple (NASDAQ:AAPL) reported earnings for the fourth quarter of fiscal year 2016 on Tuesday, and the company delivered its first annual decline in sales over the last 15 years. However, there are strong reasons to believe that Apple will start growing again in 2017, and this could be a powerful driver for the stock.

Apple operates in the high-end segment of the pricing spectrum, and it's not easy for the company to gain market share against lower-priced competitors. Since market penetration levels are already quite high in the company's main segment, renewal sales are crucial for Apple when it comes to generating sales growth.

Based on calculations from Cowen analyst Timothy Arcuri, over the coming quarters 43% of iPhone customers will own a device that is older than two years, and this could materially accelerate renewal sales in 2017.

Most customers don't upgrade their iPhones every year, as those devices are generally considered to be "good enough" and still relatively new. But upgrades are typically much more common once the devices are over two years old. Based on data from BMO Capital Markets, 82% of iPhone upgraders in each cycle have phones that are two years old or more.

The iPhone 6 was a spectacular success for Apple in fiscal 2015. The company sold over 231 million devices that year, a staggering increase of 37% versus fiscal year 2014. Big sales in 2015 are a headwind for Apple in 2016, as most customers own a relatively new device. In the recently completed fiscal year, Apple sold 212 million units, down by 8% versus fiscal 2015, but still up 25% from fiscal 2014.

CEO Tim Cook said in the most recent earnings conference call that management is "thrilled" with the customer response to iPhone 7 and iPhone 7 Plus, and demand for these devices is outstripping supply. It's hard to tell precisely what this means in terms of unit sales, but it's good to know that management is seeing encouraging demand for the company's main product.

The iPhone may benefit from easier annual comparisons in 2017, and the product generated nearly 60% of Apple's total revenue last quarter. The company's second-largest segment is services, which produced 13% of revenue during the period, with sales growing 24% year over year. The services division will most probably have a sizable impact on total revenue growth in the coming quarters, so Apple's two biggest segments look quite strong going forward.

Apple management is expecting revenue in the first quarter of fiscal 2017 to be between $76 billion and $78 billion. This would represent a year-over-year increase of 1% at the midpoint of the range. The figure would also be a return to growth, since Apple has delivered declining top-line figures since the second quarter of fiscal 2016. For the full-year 2017, Wall Street analysts are expecting $229 billion in sales from Apple, an increase of 6% over 2016. 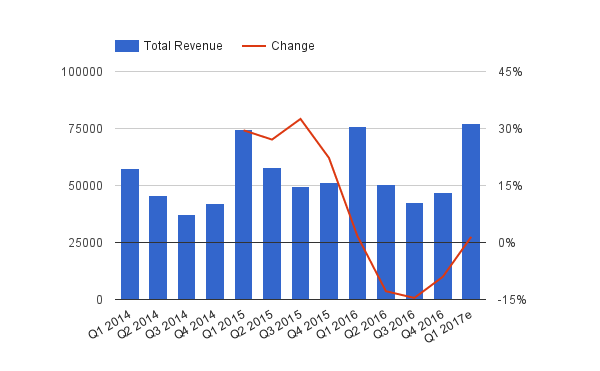 Even if the company is growing at a modest rate, an expanding business is clearly much better than a company facing declining revenue. When sales are moving in the wrong direction, investors typically wonder if this is just a temporary problem or the business is in permanent decline. After all, many companies in the consumer technology space have gone from market leaders to big losers due to increasing competition or changing consumer demand over time.

Apple is a gargantuan business, and it can be quite a challenge for a company of that size to find new growth opportunities which are big enough to move the needle in terms of company-level financial performance. On the other hand, if Apple starts growing again, this would materially alleviate concerns about its fundamental soundness, which could generate big returns for investors in Apple stock over the coming quarters.