As one of the largest oil-field service companies in the world, Halliburton Company (NYSE:HAL) deeply embeds itself into most of the world's biggest oil companies. Because of that, it has its finger right on the pulse of its customers. That gives it unique insight into their plans, which it can aggregate into a detailed view on the future of the oil market. Here's what it sees up ahead.

On Halliburton's recent third-quarter conference call, CEO Dave Lesar provided listeners with the company's updated view of the oil market. He started with a reminder:

We remain steadfast in our belief that significant activity increases from our customers starts with sustainable commodity prices over $50 per barrel, which we haven't seen in any meaningful way yet since the rig count activity bottomed out. Operators have had time to reflect on future drilling plans, and I believe they will approach the recovery with a rational, methodical response in activity based on commodity price fluctuations.

In other words, while $50 oil is the pivot point for customers to start thinking about putting rigs back to work, they needed to have confidence that crude will remain above that level before they ratcheted up their capex budgets to add more rigs. That has certainly played out in the relationship between oil and the rig count this year: 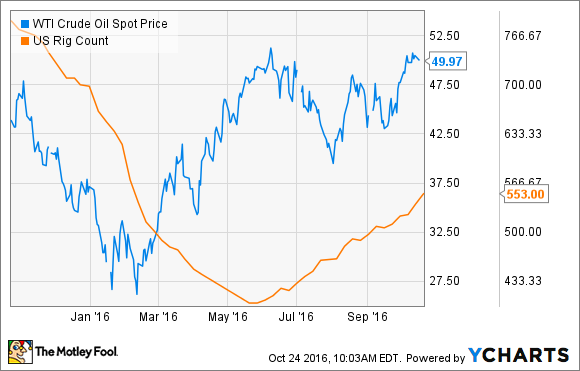 As Lesar noted, while the rig count has started to increase, producers are methodical in their approach to ramping activities. For example, leading Midland Basin producer Pioneer Natural Resources (NYSE:PXD) announced last quarter that it planned to increase its rig count from 12 to 17 during the second half of the year. However, Pioneer Natural Resources planned to slowly add rigs to its fleet, with it scheduled to add one in September and two each in October and November. That slow approach is because Pioneer and its rivals did not want to add too many rigs early on in the recovery in case it was another false bottom.

The holiday hold before the new year's rush

Next, Lesar provided his view as to what lies just over the horizon for the industry. He said:,

Now, looking ahead to the fourth quarter on North America land, activity levels are difficult to call at this point. Based on current customer feedback, we remain cautious around customer activity due to holiday and seasonal weather related downturns. Our customers may take extended breaks, starting as early as Thanksgiving and push additional work to the first quarter of 2017. As one customer told me, Dave, it doesn't make any sense for me to rent an efficient high-spec rig, if I have to start and stop all the time for the holidays or the last five weeks of the year. I just can't get the efficiencies I'm paying for in the rig. I would rather just wait till next year to start drilling. And I believe we will see a lot of that mentality in the fourth quarter. But that being said, it does not change our view that things are getting better for us and our customers.

As Lesar points out, its customers are not rushing out to add more rigs now that oil seems to have stabilized around $50 a barrel. Instead, they are actually planning to take a break from drilling activities during the holidays because the economics of drilling during that time frame are not as good because of all the starts and stops. That is because drilling speed is a crucial factor in getting well costs down and drilling returns up. For example, leading shale driller EOG Resources (NYSE:EOG) has achieved an average of a 46% reduction in average drilling days in its Delaware Basin oil play since 2014, which has contributed to a 43% drop in completed well costs. Because of that drop in costs, EOG Resources can earn a 30% after-tax rate of return at flat $40 oil on its best drilling locations in that play.

Furthermore, EOG Resources' returns improve to 60% once oil tops $50 a barrel, which is compelling enough for the company to restart its production growth program. As a result, starting next year EOG Resources plans to deliver 10% compound annual production growth through 2020 as long as oil stays above $50 oil. That said, EOG Resources is not alone in targeting a return to growth at $50-plus oil. Joining it is Pioneer Natural Resources, which plans to deliver 15% compound annual production growth through 2020. In fact, Pioneer can achieve that growth rate while remaining cash flow neutral by 2018 at roughly $55 oil. Likewise, Canadian driller Encana (NYSE:OVV) sees $55 oil fueling long-term sustainable growth. According to its latest five-year forecast, Encana envisions delivering 60% liquids growth by 2021. Many other producers are putting out long-term production forecasts with an aim to restart growth next year as long as oil is above $50, which certainly aligns with Halliburton's view.

Halliburton continues to believe that once oil is sustainably above $50 that producers will start ramping drilling activities. That is certainly playing out in the rig count as companies like Pioneer are cautiously bringing back rigs. That said, it does not see a significant ramp-up in activities until 2017, when companies like EOG Resources plan to begin ramping back up. While that means that the fourth quarter will not be that great for Halliburton, it seems to suggest that 2017 could be a big year for the sector.