The company announced that it is going to take aggressive strategic actions to enhance shareholder value at both Marathon Petroleum and its subsidiary MPLX, but no one is exactly sure what that means.

Refining companies have had a tough business these past couple quarters, and Marathon Petroleum (MPC 1.24%) was no exception when it reported an 85% drop in earnings this past quarter from the prior year. That kind of drop would normally be the headline of every news story for this company, but even that was overshadowed by the announcement that the company was looking to take a different direction with its subsidiary partnership MPLX (MPLX 3.15%).

Let's take a quick look at why this quarter was so tough for Marathon, and why the announcement of its structural change was the bigger highlight of the day.

The large drop in earnings was mostly attributed to the change in general refining margins across the refining segment. The change in Light Louisiana Sweet crack spread -- the metric Marathon uses as an indicator of refining profits -- lowered refining margins by $711 million compared to this time last year. The other big change came in the form of Renewable Fuel Standard costs, which more than doubled to $80 million for the quarter. Some of those declines were offset by a $165 million improvement in earnings from its Midstream segment, which benefited immensely from MPLX's purchase of MarkWest Energy Partners this time last year. 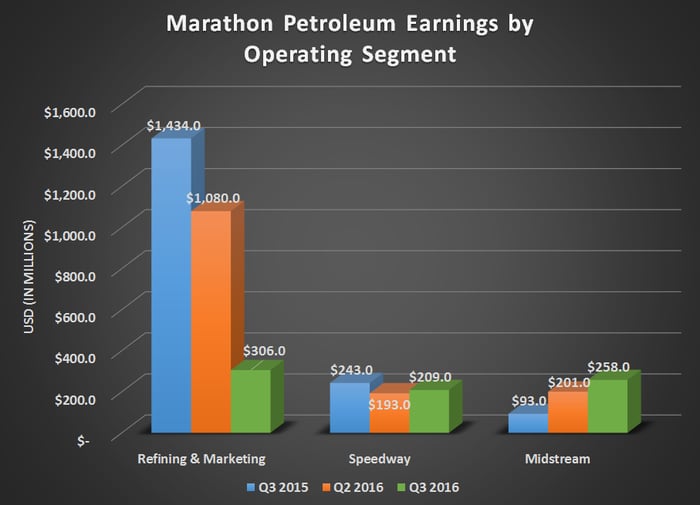 From a cash flow perspective, things weren't nearly as bad. Excluding changes in working capital -- which tend to work themselves out over time -- cash from operations totaled $1.07 billion. The company put some of that cash to work by buying back $51 million worth of shares, and repaying $516 million in debt from cash on hand.

In response to the big, but still rather vague, announcement that it is looking to more aggressively drop down midstream assets to MPLX, there were obviously lots of questions from analysts. Some might read the company's initial press release as a sign that the investment in MPLX isn't panning out as it thought. Based on statements on the earnings call from both CEO Gary Heminger and CFO Timothy Griffith, the company is looking to do a few things here.

[W]e spent the early part of the year in the transition to get MarkWest into the fold and to really get our businesses lined out. And then, really focused on what is the proper growth strategy and how do we -- we have [a] tremendous portfolio of assets that can be considered over time to be drop-down. And we felt that it was the best to get into a very aggressive, strong rhythm on how to drop down the assets that we have. It's not just a drop-down strategy, Neil, we expect to be acquisitive in certain markets where it makes sense for the midstream, as well as we have a very good organic suite of projects to work on. But as we step back and looked at our total midstream business, we felt that now is the time to take this very bold, aggressive action.

[W]e've seen pretty clearly that the value of the GP [General Partner] is not being fully recognized in the value of MPC. So I think we want to take a careful but aggressive look at, exactly, ways that we can highlight that value, capture it and optimize the cost to capital for the partnership. So again, I would say that we really want to look at everything. There is no preconceived notion or conclusions as to where ultimately this may lead us. Again, with that objective of highlighting that value and optimizing the cost of capital for the partnership, it could include things like a buy-in of the IDRs [Incentive Distribution Rights] at the partnership level, public sale of some portion of the GP, other alternatives around restructuring the GP interest.

Based on this, it sounds as though the subsidiary is being weighed down by its cost of capital, especially incentive distribution rights that make the issuance of equity much more expensive. This really puts MPLX's future up in the air, since this new strategy could change the structure of the company. From Marathon Petroleum's perspective, it could also be a significant change, since midstream earnings tend to be much more stable than those from refining.

There is going to be a big shakeup at Marathon in the coming quarters, as it tries to find what it says is the optimum way of maximizing shareholder value. Without knowing exactly what that means, it's hard to say if it's a good plan or not. The overwhelming consensus from analysts is that the structure of incentive distribution rights is keeping the price of MPLX units low, and that makes the stock prohibitively expensive. At the same time, having the support of a well-capitalized business like Marathon Petroleum as the parent company does help with MPLX's ability to access capital. Somehow, management is going to have to find a way to reconcile all of these things, which isn't an easy task.

Until we get a clearer picture of what management plans to do, it's probably best that we all sit tight and wait before making any investment decisions.