The first assumption that many investors may have had when shares of Cliffs Natural Resources (NYSE:CLF) fell sharply after announcing earnings was that something went very wrong that will impact the future of the business. Sure, Cliffs' earnings did slide back into the loss column during the third quarter, but other aspects of the earnings release suggest that it is set up rather well for next year, and maybe beyond.

Let's take a quick glance at why those third-quarter numbers weren't that bad, and why investors should be encouraged for the coming years.

There are a couple things baked into the decline in earnings that make the numbers look a little worse than the overall situation at the company. The first is that the company took a loss on the extinguishment of some of its debts. This was one of those temporary hits that a company should take, because the payoff lowered annual interest expense payments by $17 million annually, and it means that the next-term notes due aren't until 2020. This gives the company lots of time to improve its profitability before any more debts come due.

Another thing that lowered earnings this quarter were some costs at its U.S. Iron Ore operations related to the restart of one of its United Taconite mines. These costs will likely be worth it, as Cliffs anticipates it will need production to meet increasing demand in 2017. 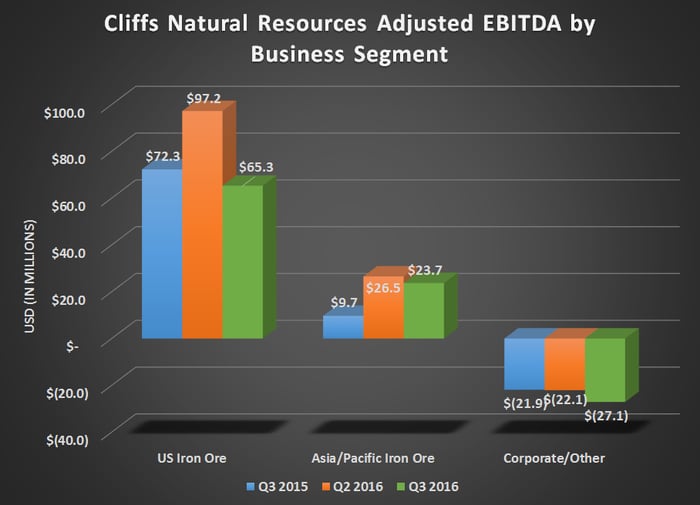 The news that should be encouraging to investors is that the company is increasing its sales guidance for 2017. According to management, customer demand has already fully subscribed to its annual production levels, and it will likely draw down on iron-ore inventories.

When CEO Lourenco Goncalves was brought on to run Cliffs a few years ago, the company was in rough shape. It had an extremely bloated balance sheet and a bunch of unprofitable assets that were dragging down the business. These past couple years, Goncalves has shed these assets and has reduced the company's debt load. With much of that work having an impact on the bottom line, Goncalves highlighted where he sees the company going from here:

For two years, we have been in the process of tackling the many pressing issues we have faced: volume uncertainty, competitive threats within the Great Lakes, loss-making non-core assets, Bloom Lake, a bloated cost structure, and a near-term debt maturity is tearing us in the face. We have moved past all of these problems.

So a question we are getting more often is, what's next? Well, let me lay out what we now have in front of us. On the financial side, we have done a lot to reduce debt, clearing over $1.1 billion over the last two years despite minimal cash flow generation. Now just imagine what we can do next year, when we're actually generating free cash. We want to make our balance sheet bulletproof to withstand the cyclical downturns that are so common in this industry. And to get to that point, we still have more work to do. With that in mind, debt reduction and maturity extinction remain our top capital-allocation priorities. To the extent we do generate free cash flow in the future, we expect to be deployed toward these goals.

On the strategic side, we acknowledge that the electric-arc furnace mills account for nearly two-thirds of steel production in this country. In order for Cliffs to be around for another 100 years, we need to evolve to the point that we are supplying and actively involved with the EAF side of the business.

The point about electric-arc furnaces and their future in the American market can't be overstated. Not only do these types of furnaces figure in a large majority of the steelmaking process in the U.S., they are also a much more profitable method of making steel. The companies that use traditional blast furnaces have been barely treading water these past five years, while those companies that focus exclusively on electric-arc furnaces have remained mostly profitable this whole time.

Cliffs will likely need to incur some capital costs to upgrade its iron-ore pellets such that they are suitable for electric-arc furnaces. In the long run, though, this is clearly the direction the company needs to move if it wants to supply American steel producers, because it's where the industry is heading.

This negative turn in earnings for the quarter was a bit of a bummer, but some of the reasons for that slide look to be temporary. Things are certainly looking up, as the company plans to increase production and draw down inventories in 2017. If Cliffs can continue to keep its costs low, then investors should expect a return to profitability, as well as further extinguishment of debt that will make the company much better positioned to withstand the ups and downs of the commodity market. All this seems to suggest that investors shouldn't take Cliffs' big stock slide after earnings as a bad sign.