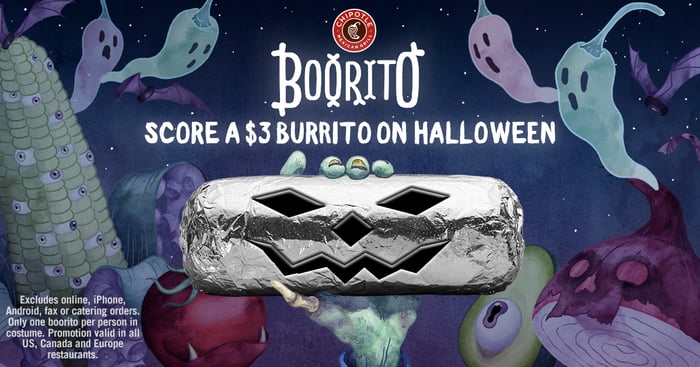 After a year of investor tricks, Chipotle Mexican Grill (NYSE:CMG) is offering a treat for deal-seeking customers. Waltz into your friendly neighborhood Chipotle in a Halloween costume after 3 p.m. today and you can buy any burrito, bowl, salad, or order of tacos for just $3.

Chipotle's been in a promotional mood this year. Last month, it was offering free fountain beverages to high school and college students and on Sundays it was dishing out free kid meals. This month's promo is a BOGO offer tied to a simple online photo-matching game. With sales in a yearlong slump since a couple of food-borne illness outbreaks tripped up the brand, it's easy to see why Chipotle is feeling a bit more generous with the markdowns and freebies than before.

We can't write off tonight's "Boorito" promo as its latest act of desperation. Chipotle has been running this stunt for years. Even when comps were posting double-digit gains and Chipotle stock was a market darling, it was always getting festive on Halloween by giving costumed patrons a one-time deal.

You may feel that you're too old to trick-or-treat or perhaps you've already returned the costume rental you borrowed for Saturday's party. But that doesn't mean it's too late to dream up a costume to shave more than half off tonight's dinner. You can also stand out from the sea of Donald Trumps, Hillary Clintons, and Stranger Things' Elevens waiting in line with you tonight with these three scary costume ideas that will likely only resonate with investors.

Nothing scares a company trying to mount a turnaround more than an activist, and that's just what Chipotle finds on its hands these days. Bill Ackman's Pershing Square announced that it was buying a 9.9% stake in Chipotle last month.

Ackman's a vocal activist in some of his hedge fund's investments, and this appears to be one of them. The filing indicated that Ackman will be engaging in discussions about the struggling chain's board composition, operations, cost structure, and management. In short, Ackman wants to shake things up to see if he can get the sluggish stock price to turn around. His presence is scary stuff for a chain trying to focus on customer attraction and retention. Reuters reported last week that Chipotle's hiring a pair of investment bankers and a law firm to help defend itself against Ackman's potential moves.

Serving suggestion: Dress up in a slick designer suit. Carry around a punching bag with Carl Icahn's face on it for bonus points.

2. The ghost of ShopHouse

One of the more stunning revelations in Chipotle's disappointing third-quarter report is that it's seeking to unload the ShopHouse Southeast Asian Kitchen concept that it launched five years ago. Giving Asian cuisine a fast-casual spin seemed like it was going to be a growth driver for the chain after its namesake chain would saturate the market, but Chipotle wasn't able to make the unit economics work at ShopHouse.

Chipotle will be exploring strategic alternatives for ShopHouse, all but assuring that this will be the end of the 15-unit chain under Chipotle's watch.

Serving suggestion: Print the ShopHouse menu on a white sheet. Make sure to cut eyeholes out, so at least one of you could've seen this coming. Carry birth announcements of Tasty Made Burger -- Chipotle's new burger concept that debuted last week -- to offset the sting.

Shares of Chipotle hit an all-time high of $757 in early October of last year, making this one of the market's biggest losers among growth stocks over the past year. The stock has gone on to shed more than half of its value since peaking. The stock hit a three-year low following this month's disappointing quarter, making the stock chart a scary sight for most investors.

Serving suggestion: Dress in all white. Paint your right arm red, and reach for your left-side hip pocket. Hold that pose. That's the chart.