Royal Dutch Shell plc (NYSE:RDS.B) is one of a small and elite group of energy giants, competing with companies such as Chevron (NYSE:CVX) and ExxonMobil (NYSE:XOM). While this group is often, and correctly, thought of collectively as oil companies, Shell is pushing hard in a slightly different direction. So if you, as an investor, are wondering if Royal Dutch Shell can regain its mojo, you need to frame the answer in a slightly different way than you might have just a couple of years ago.

A tough spell for energy

In mid-2014, oil prices hit the skids, falling precipitously and taking the top and bottom lines of the oil majors with it. For example, Shell's revenue fell roughly 37% between 2014 and 2015 and is tracking even lower so far this year even though oil prices are starting to stabilize. Earnings per share were hit even harder, declining nearly 90% between 2014 and 2015. Although that's in large part due to asset writedowns, you can see that the oil market's decline is taking a big bite out of Shell's results. And, as with the top line, earnings have remained relatively weak so far in 2016.

To be fair, this isn't much different from Shell's peers. Chevron's bottom line declined roughly 75% between 2014 and 2015. Worse, it's bled red ink for three consecutive quarters now. Exxon has held up better than most, with earnings falling "only" around 50% between 2014 and 2015. Results continue to trend lower in 2016, though it has managed to keep itself on the positive side, in terms of earnings. (Note, however, that unlike its peers, Exxon hasn't written down the value of any of its assets.)

Put simply, it's bad right now for the oil majors. And every single one of them has a mojo issue.

Growing during the oil downturn

But unlike most of its peers, Shell has made an aggressive bet on a different energy future. During oil's most difficult days, the company spent about $50 billion to acquire natural gas-focused BG Group. Essentially, Shell has doubled down on a bet that natural gas will be a growth engine in the energy space in the very near future.

This is no small wager, either. Take a look at the two bar charts comparing Shell with its closest peers. The one on the left shows that, at this point, Shell is by far the largest player in the global liquefied natural gas trade. No other company comes close. And the chart on the right shows that Shell has more exposure than any of its peers to natural gas, with the closest competitor being ExxonMobil. In fact, oil and gas are roughly 50/50 weightings at Shell.

Oil is important for Shell, as it is for all of the other oil majors. But natural gas is equally important, something that can't be said for its peers.

Some mojo in the tank

From this perspective, for Shell to regain some of its lost luster, its oil business will have to rebound. But that won't be enough for the company to really get its mojo back. For that to happen, natural gas demand will have to play out as Shell expects. 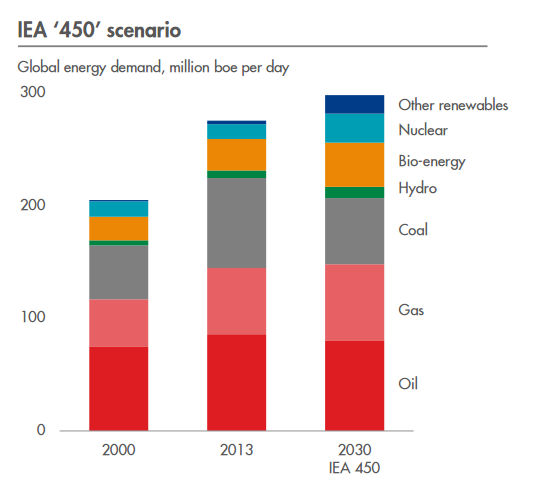 There are some positives to look forward to here, though. For example, in the preceding bar chart, the International Energy Agency (IEA), a global organization that tracks energy use, predicts that demand for oil will fall slightly between 2013 and 2030. Natural gas demand, on the other hand, is projected to increase, partly because natural gas is a cleaner alternative to coal and oil in many applications.

Royal Dutch Shell's BG investment, a double-down on natural gas, is clear evidence that the company is looking to be on the right side of that equation. And if the future that both Shell and the IEA envision comes to pass, then Shell will be flexing some major mojo that its peers, at this point, won't be able to match.+

How Shell will get its groove back

If you're wondering whether Royal Dutch Shell can rebound to pre-crash days, you'll want to make sure you watch both the oil and the natural gas sides of the business. Each will play a pivotal part. That said, it's natural gas that will probably be the big determinant of the company's future success. And at this point, the signs appear to point to a future of positive mojo.