Last week, Chipotle Mexican Grill (NYSE:CMG) laid out its preliminary guidance for 2017, and explained the initiatives it is taking to recover from the massive sales declines triggered by last year's E. coli outbreak.

Investors weren't impressed. Following the earnings report, Chipotle stock fell to its lowest level since 2013. Indeed, the stock has lost more than half of its value since peaking a little more than a year ago: 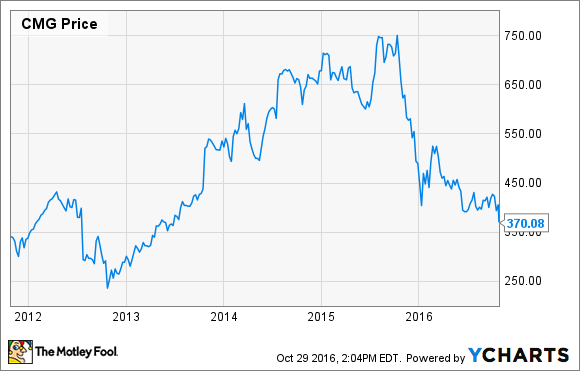 This demonstrates the extent to which investors mistrust Chipotle's management. The most recent stock price decline implies that Mr. Market doubts not only Chipotle's ability to hit its 2017 targets, but also its prospects of returning to historical levels of profitability at any point in the future.

In Q3, Chipotle once again suffered a significant year-over-year comp-sales decline, leading to sharp margin erosion. Comparable restaurant sales fell 21.9% year over year, while earnings per share plunged to $0.27 from $4.59 a year earlier. Excluding an impairment charge and a revenue deferral associated with Chipotle's summer rewards program, EPS would have been $0.79.

First, Chipotle is making targeted additions to its menu. It rolled out a new chorizo menu option nationwide earlier this month; chorizo has proven popular and is enticing some of Chipotle's most loyal customers to visit more frequently. Chipotle also plans to add a dessert item to its menu in the near future.

Second, Chipotle is implementing a variety of new digital capabilities; these include an enhanced mobile website and other tools to simplify online ordering, and speed up throughput to reduce wait times.

Third, Chipotle is testing TV advertising, with the idea of rolling out a national TV ad campaign next spring. TV advertising has the potential to reach a larger audience than Chipotle's traditional marketing strategies, driving increased traffic.

Chipotle is also keeping a closer eye on expenses. During the earnings call, CFO Jack Hartung outlined a variety of measures the company is taking to reduce annual costs by about $100 million.

Between these expected structural cost savings, more normalized marketing and promotional costs, and Chipotle's sales forecast, management projected that EPS will rebound to $10 in 2017. That's still well below the company's peak earnings power, but it would mark a huge improvement from the roughly breakeven results it has been delivering this year.

Based on Chipotle's sales trends this year, it's clear that it will take a long time for it to recover from the E. coli outbreak.

Chipotle has a long way to go to restore profitability to its prior level. Image source: The Motley Fool.

It would be virtually impossible to recover those lost sales in a year or two. Yet Chipotle has a much greater chance of doing so over the next four or five years. In fact, some of its recent initiatives around online ordering will enable the company to achieve higher sales per restaurant in the future.

If Chipotle recovers to its previous peak of $2.53 million in sales per restaurant over the next five years, while continuing to open 200 to 250 new restaurants annually, it will surpass $8 billion in revenue by 2021. Assuming an after-tax margin of 10% -- in line with Chipotle's average between 2011 and 2015 -- EPS could reach $30. If EPS rises that much, Chipotle stock could more than double from its current level.

No way to know for sure

There is simply no way to be sure today whether or not Chipotle will ever fully recover from its food-safety scandal. Fads do occur from time to time in the restaurant industry, and it's possible that Chipotle's best days are behind it.

But that's not the most likely outcome. As long as Chipotle can avoid major food-safety lapses going forward, customers will probably "forgive and forget" as time goes by.

Chipotle doesn't need to recover quickly for the stock to offer a market-beating return over the next five years. It doesn't even need to hit its 2017 earnings target. Chipotle just has to recover within some reasonable period of time to drive the stock to new all-time highs.