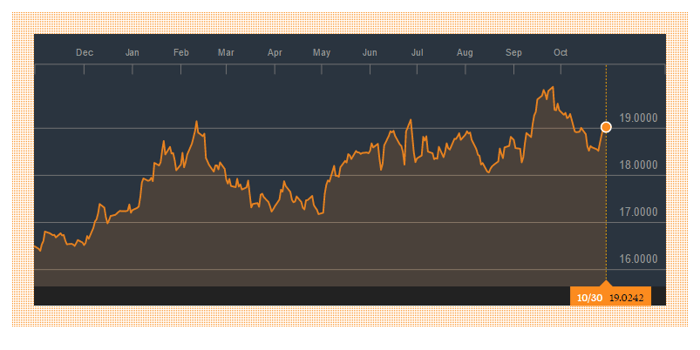 As we discussed in last quarter's earnings recap, GAP issued full-year revenue and earnings guidance in July, which assumed that revenue growth would ease to the mid to high teens for the back half of the year, after accounting for the IFRS concessions adjustment. In the third quarter, however, revenue expanded by 24.4%, even after this adjustment.

Management thus appears to have more conviction in GAP's full-year performance potential, and accordingly, raised 2016 guidance this quarter, in a band of plus or minus 1 percentage point for each earnings item, as follows:

Grupo Aeroportuario is reaping benefits from a vibrant Mexican economy and, more specifically, the aggressive route expansion of Mexican airlines. While last year the purchase of Montego Bay airport provided an acquisition-centered narrative for top-line improvement, investors have seen convincing organic growth from domestic operations this year. The company will need to sustain its momentum for another quarter to meet its raised estimates, but the plethora of new routes opened in the second and third quarters may point to continued traffic growth in 2017.