When it comes to refining stocks, there is only so much a company can do to affect overall earnings. Ultimately, it will all come down to market conditions. So, even though Phillips 66 (NYSE:PSX) did all the right things this quarter, the near-50% decline in refining margins was too much to overcome.

Still, there are plenty of items in this most recent quarter that suggest Phillips 66 remains on the right track. Let's take a look at the results for the quarter and what investors should expect from here.

The biggest weak spot in Phillips 66's earnings for this quarter was the rapid drop in refining earnings as well as a slide in chemical earnings. On the refining side, those declines were very much a product of the refining environment rather than the business itself. Refinery utilization for the quarter was a very impressive 97%, and its clean product yield -- the percentage of refined products that were higher-margin gasoline and diesel -- was a respectable 84%. It all pretty much came down to refining margins. In the third quarter of last year, realized refining margins were $13.96 per barrel, whereas in this past quarter, they came in at $7.23 per barrel. Refining is a very high fixed-cost, relatively low variable-cost business, so that extra $6.73 per barrel last year pretty much flowed directly to the bottom line.

On the chemical side of the business, the decline came mostly from a small slump in production rate -- capacity utilization dropped from 94% to 91% -- and an uptick in cash costs for its feedstock.

One of the more encouraging things in this earnings report was the modest improvement in midstream results. This was partially attributed to Phillips 66's investment in DCP Midstream -- the general partner of DCP Midstream Partners (NYSE:DCP) that Phillips 66 owns with Spectra Energy (NYSE:SE) -- turning back to a positive result. This part of the business was in a rough spot a year ago, when both Phillips 66 and Spectra needed to inject some cash into the business and give it some assets. Some cost-cutting measures, shifting its contract structure toward fee-based services, and the added assets have helped turn things around. 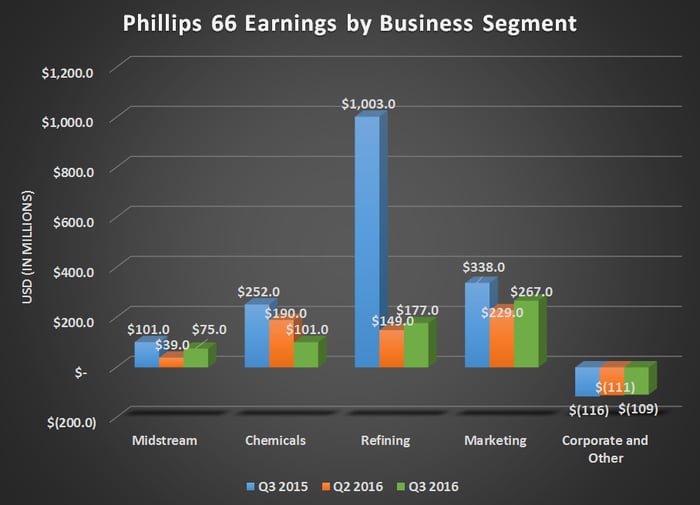 Probably most surprising was the announcement that the company reduced its capital spending outlook for the year from $3.9 billion to $3 billion and that it expects capital spending in 2017 to be slightly below $3 billion. The change in spending mostly came from the deferral of a few projects as well as what it calls a project financing issue. Over the short term, this may not be much of an issue, because the company has several projects near completion that will boost earnings, including the expansion of its Beaumont terminal, CPChem's -- the chemical manufacturing joint venture with Chevron (NYSE:CVX) -- Gulf Coast Petrochemical plant, and its Freeport LPG export terminal. The larger effect of these capital spending declines will likely become known a few years down the road.

Like in so many other quarters, CEO Greg Garland gave a statement that sounded very much like "steady as she goes." Based on the company's operations, it's easy to see why he thinks that way. One thing that caught my eye was that he discussed some details about how the company is planning its capital spending and distributions to shareholders for next year:

We're continuing to execute on our disciplined capital allocation strategy. We recently lowered capital guidance to approximately $3 billion for 2016 and expect our 2017 capital budget to be below $3 billion. We are growing our higher-value businesses and are focused on high-return, value-enhancing projects. We're executing well on our projects under construction and we remain confident that our growth strategy will create value for our shareholders.

We target a long-term 60-40 split between reinvestment and distributions. We expect the free cash flow generated from operations and proceeds from Phillips 66 Partners' capital market access to be sufficient to fund our growth program and distributions to our shareholders. We remain committed to a growing, secure and competitive dividend as well as $1 billion to $2 billion per year of share repurchases.

Those share repurchases are notable because the company has already done a lot of it since it went public back in 2012. 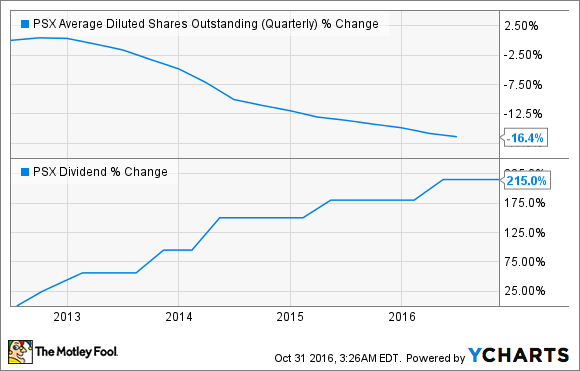 Sometimes, no news is good news. This was very much the case for Phillips 66 this quarter. The company continued to run its operations well, but the higher costs for crude oil and natural gas took a bite out of earnings for its refining and chemical businesses. 2017 is shaping up to be a pivotal year for the company as several of its assets under construction will come into service. In the meantime, Phillips 66 will continue to generate decent profits and return high rates of cash to its shareholders.

Phillips 66's Earnings: The Best They Could Be in a Tougher Refining Market @themotleyfool #stocks $PSX $CVX $SE $DCP Next Article
Current