Shares of Lumentum Holdings Inc. (NASDAQ:LITE) were falling today, continuing a slide that his hit several fiber-optic stocks over the last few session. Shares of the optics and photonics tech company finished down 10.3%. 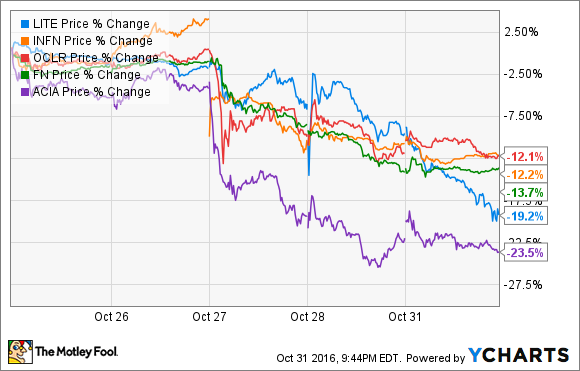 For Lumentum, the sell-off began on Thursday, as its earnings report approached that night. On high trading volume, the stock fell 4.3% on Thursday and 3.9% on Friday, tracking with several of its peers.

Strangely, Lumentum delivered a strong earnings report, beating estimates on the top and bottom lines. Adjusted earnings per share increased from $0.41 to $0.49, better than estimates at $0.44, while revenue jumped 21.4% to $258.1 million, ahead of expectations at $251.2 million. CEO Alan Lowe said the company reported record revenue in the quarter and noted improved operating leverage and strong growth in all of the company's segments.

A number of factors seem to have contributed to the slide across industry stocks. Last week, Alphabet (NASDAQ:GOOG) (NASDAQ:GOOGL) announced that it will scale back expansion of its fiber-optic network Google Fiber and cut jobs. That news seemed to cool off hopes for one growth outlet in the industry. At the same time, a sales miss by Chinese telecom equipment maker ZTE was a negative for Acacia Communications (NASDAQ:ACIA), as ZTE is one of its biggest customers, and the merger of CenturyLink and Level 3 Communications is a sign of consolidation further down the supply chain, meaning negotiations could get tougher.

Within the fiber-optics industry, Infinera (NASDAQ:INFN) stock fell 14% on Friday on a weak outlook and as sales and earnings continue to slide. As for Lumentum, its outlook was modest considering the strong performance in the past quarter, as it sees EPS of $0.47-$0.55 and revenue of $258 million to $270 million. The midpoints of both of those ranges are below the analyst consensus, meaning the market could see growth declerating after a strong quarter.

That could be one reason for Lumentum's stumble. Another may just be a pullback on profit-taking in the industry, as fiber-optic stocks have had a blowout year -- Lumentum is still up 37% after the recent sell-off. Considering its strong sales momentum, that decline could offer an appealing entry point for the stock.