The third, and most important, tidbit has to do with a fundamental change in the business model. 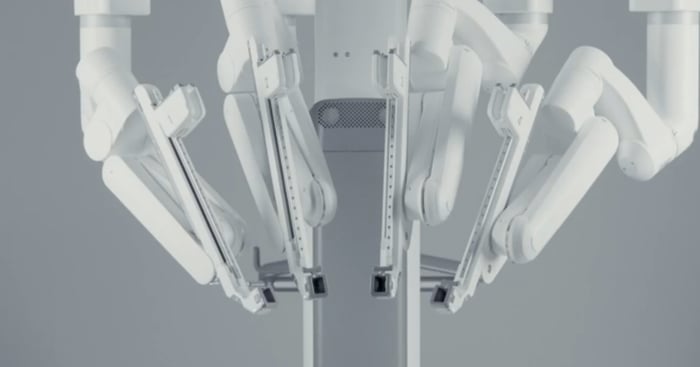 We're now two weeks removed from Intuitive Surgical (ISRG 1.19%) releasing third-quarter earnings. Given that the stock is down over 5% since then, it would be easy to assume that there was bad news. But the quarter itself was solid; the decline has more to do with expectations perhaps getting a little ahead of reality over the past year.

But for long-term shareholders who aren't too worried about short-term noise, there was still a lot of important -- and new -- information to digest. Here were the top three points of note.

These will likely be the growth drivers moving forward

It's no secret that the growing use of the daVinci Xi surgical system to perform hernia repairs has been a key reason for the rise in the company's stock. Oftentimes, when Intuitive has such an operation on its hands, it commissions studies to help convince -- or confirm, if need be -- the efficacy of using the daVinci in such situations.

While the statement might not seem that important on the surface, it gives a window into what investors should keep an eye on. While it's clear that hernias are becoming more and more important by the quarter, management thinks that colorectal and thoracic surgery could be significant contributors in future.

An interesting joint venture in China

While it is far too early to know if it will amount to anything, management announced a very interesting joint venture (JV) with Chinese company Fosun Pharma. CEO Dr. Gary Guthart said: "The JV's first objectives are to... address an acute need in the diagnosis and cost-effective treatment of lung cancer, one of the most commonly diagnosed forms of cancer in the world... This system is in its early stages of our human clinical experience, and final clearance and launch targets are not yet set. That said, the raw capability of the technology is compelling, and it has the potential to perform as a broader diagnostic and treatment platform over time."

China represents an enormous market for Intuitive. Currently, there are quotas in place that regulate how many daVinci systems can be placed in the Middle Kingdom; the company hasn't been able to raise those quotas.

So while the work with Fosun could be beneficial on its own, it also represents an attempt to show Chinese officials that Intuitive's technology could offer a significant step up in patient outcomes.

A subtle, but important, shift in Intuitive's business

But perhaps the most important comment came not from Intuitive management, but analyst David Lewis of Morgan Stanley. He said:

"[T]he Intuitive story is sort of poised for pretty significant change. I really think Intuitive has always really been about one system. ... But if I think about the next two years ... you're still going to have Xi and all those multiple Intuitive prior systems, you will have XSP, and you're also now going to have this catheter-based sensing system. So I wonder if you could help us understand -- are we right to think about this company as morphing these next two years?"

Guthart responded that while Lewis's two-year time frame was a bit too short, there was a point to what he was getting at: "Yes, fair enough," he said, concluding that "as we look from the bottom of your feet to the top of your head and look for opportunities to get better outcomes, we think of a variety of technologies... that can really make a difference, and... we're putting our money where our mouth is."

In the past, it's been easy to view Intuitive as a one-trick pony. Much as a smartphone company produces many iterations of the same basic product, Intuitive has moved from the daVinci Si to the Xi, and all add-ons have been just that: add-ons. But moving forward, starting with the introduction of the "Sp" single-port technology, there will be more platforms on which Intuitive operates.

That will be a slow-moving, but critical, element for long-term investors to keep an eye on.

All things considered, Intuitive remains a company that is changing the face of surgery for the better, in America and around the world. There's no telling where that may take Intuitive, but the opportunities for the company, shareholders, and patients remain promising.