Please ensure Javascript is enabled for purposes of website accessibility
Log In Help Join The Motley Fool
Free Article Join Over 1 Million Premium Members And Get More In-Depth Stock Guidance and Research
By Daniel B. Kline - Nov 1, 2016 at 8:43AM

Both companies are attractive, but one has a longer track record of success.

As the media-distribution world continues to consolidate, Frontier Communications (FTR) and T-Mobile (TMUS -0.52%) have been the speculation of numerous takeover rumors.

In the case of the wireless company, that's because it has been showing spectacular growth. In its most recent quarter alone, T-Mobile added 2 million net customers, its 14th straight quarter over 1 million. In addition, the company produced $366 million in net income, an impressive number, given that much of its growth has been fueled by discounting.

For Frontier, the recent results haven't been so rosy, with the company losing $80 million in Q3, coming off a $240 million loss in Q2. Those numbers, however, don't tell the whole story, as the cable, internet, and phone company hasn't been built to turn a profit right away. Instead, it's quarters into a bold play to become a big player, having nearly doubled in size after buying Verizon's (VZ 2.03%) wireline operations in California, Texas, and Florida.

For different reasons, both Frontier and T-Mobile are acquisition targets. That's partly because the companies have a strong asset in their subscriber bases and partly because there are so few remaining companies in play in these spaces. But even without the premium an purchase would bring, a case can be made for owning T-Mobile and Frontier, but one is clearly a better buy. 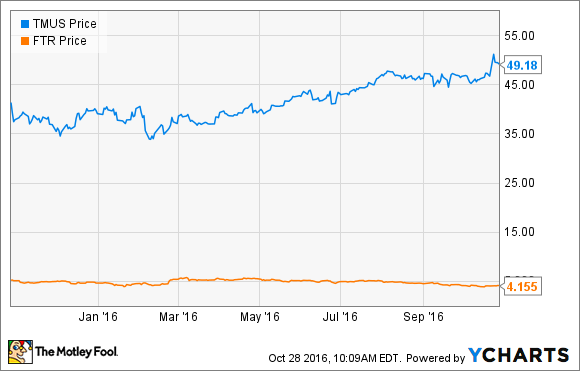 If you buy Frontier, it's because you believe in CEO Dan McCarthy's long-term vision for the company, because its short-term results have been, and may continue to be poor. That's because the company has decided to take on much bigger competition, which requires heavy spending.

Still, there were some very strong signs in the company's Q2 earnings report that suggest it will eventually thrive even if it doesn't get bought out. First, the company saw its average revenue per user (ARPU) jump from $64.43 in Q3 2015 to $83.20 in the same quarter in 2016. That's a jump attributable to the Verizon acquisition, and it looks as if Frontier will be successful holding onto those purchased customers, as churn moved only from 1.78% in 2015 to 1.91% in Q3 2016 -- a very minor jump, considering the complexity of the cutover from Verizon.

The other strong number for Frontier shareholders to watch is exactly how much money the company can save from the acquisition. Those numbers have come in above original expectations, and McCarthy broke it down in his comments in the Q3 earnings release.

"We are very pleased with the performance of our newly acquired assets and our achievement of annualized cost synergies of $1 billion in the second quarter. We now expect annual cost synergies related to the acquisition of $1.25 billion, up from our original estimate of $700 million," he said.

Frontier is a long-term bet with a risky future but the company has been willing to pay people for taking that risk. The company has paid a steady dividend since 2004, with the current quarterly payout sitting at $0.1050 per share.

While T-Mobile doesn't pay a dividend, it has been an incredibly steady growth company. In addition to its three and a half years of adding over 1 million subscribers a quarter, the company has also been incredibly consistent when it comes to growing service and overall revenue, according to its Q3 earnings release.

In the third quarter, T-Mobile posted a 13.2% year-over-year increase in service revenue. That, according to the company, made it the industry leader in growth for 10 consecutive quarters. In addition, the wireless carrier grew total revenue by 17.8% in Q3, marking the 13th time in past 14 quarters it led in that category, it noted in the earnings release.

The only real negative headwind for T-Mobile may be that the rest of the industry has begun to copy its Un-carrier moves -- its series of innovations that include dropping contracts, eliminating device subsidies, and most recently having all its plans offer unlimited data. Sprint has been the most blatant copycat, basically doing what T-Mobile does as quickly as it can. Verizon and AT&T (T 2.02%)have been less willing followers, but they've now copied most of the Un-carrier moves in some fashion.

T-Mobile, like Frontier, has also shown ARPU growth, increasing that metric by 2.2% in Q3 to $48.15 for its most-important branded post-paid customers. A similar stat, average billings per user, was $63.38 in the third quarter for post-paid customers, a 1.5% year-over-year increase.

Is Frontier or T-Mobile a better buy?

The decision over which of these two stocks to buy comes down to risk subsidized with a dividend versus a steady track record of growth. Frontier has done a good job buying its way to growth, and the early signs suggest it's going to be successful holding on to those customers. T-Mobile has shown that its strategy works.

The company has been steadily adding customers at a blistering pace for over three years. That's a track record that suggests that even though its main rivals will continue to copy its strategies, they won't be able to slow down its momentum.

Frontier has potential and a dividend, but T-Mobile has a track record. There may even be more upside in the cable/internet company, but it's a much riskier proposition. T-Mobile is a better buy because it's a growing company with continued upside that has proved it can continue to deliver over the long term in a very competitive market.