In recent quarters, Facebook (NASDAQ:FB) has absolutely crushed it when it comes to growing its top line. But there's good reason this growth won't last. Indeed, the deceleration may have already started -- investors will find out whether or not the growth rate is contracting when the social network reports quarterly results on Wednesday, Nov. 2, after market close.

One reason Facebook's revenue growth is likely to decelerate soon is because recent astronomical growth rates are unsustainable. Facebook's $6.4 billion in second-quarter revenue, for instance, was up an incredible 59% compared to the year-ago quarter. This growth was driven by a 63% jump in Facebook's advertising revenue, which accounts for 97% of Facebook's total revenue.

For comparison, Aphabet's (NASDAQ:GOOG) (NASDAQ:GOOGL) Google revenue, which is driven primarily by digital advertising revenue, increased a more modest (but still solid) 20% in the company's most recent quarter. Sure, Google's $22.3 billion in quarterly revenue during the most recently reported quarter dwarfs Facebook's top line. But as Facebook's business continues to grow, the social network's growth rate for its advertising revenue will inevitably begin to decelerate toward levels closer to Google's. 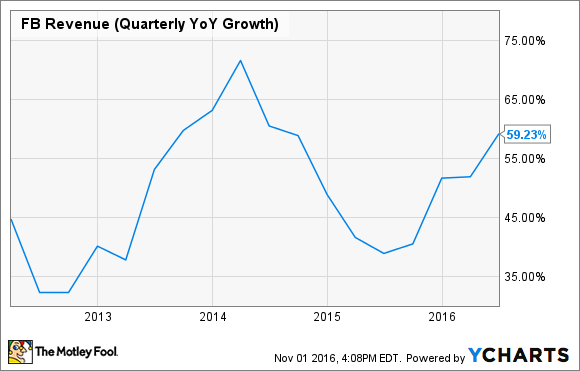 Management has warned of a coming deceleration

Perhaps the most obvious reason to expect Facebook's revenue growth to decelerate in the coming quarters is because management has essentially warned that this is exactly what is going to happen.

And beyond Facebooks' third quarter, investors should expect revenue to continue to decelerate, according to Facebook management. Wehner explicitly warned a key driver for Facebook's advertising revenue -- ad load -- won't be as big of a catalyst in the future.

Additionally, we anticipate ad load on Facebook will continue to grow modestly over the next 12- months and then will be a less significant factor driving revenue growth after mid-2017. Since ad load has been one of the important factors in our recent strong period of revenue growth, we expect our ability to grow revenue will be impacted accordingly.

For Facebook's third quarter, analysts seem to be taking management's warning into account. On average, analysts are expecting revenue to increase by about 54%, down from Facebook's 59% growth in Q3. But this is still a notably optimistic outlook considering just two quarters ago Facebook's year-over-year revenue growth was lower, at 52%.