Distributing food has become much more demanding over the years, and Chefs' Warehouse (NASDAQ:CHEF) has taken full advantage of the appetite for higher-quality ingredients to build up its business. Yet the restaurant industry has gone through turmoil lately, and coming into Wednesday's third-quarter financial report, Chefs' Warehouse investors wanted to see signs that the company would be able to sustain growth at a healthier pace even amid difficult conditions. Chefs' Warehouse wasn't able to satisfy its shareholders completely, seeing solid revenue gains but falling net income. Nevertheless, the company is optimistic that its long-term prospects are good. Let's take a closer look at how Chefs' Warehouse did and whether it can bounce back in the future. 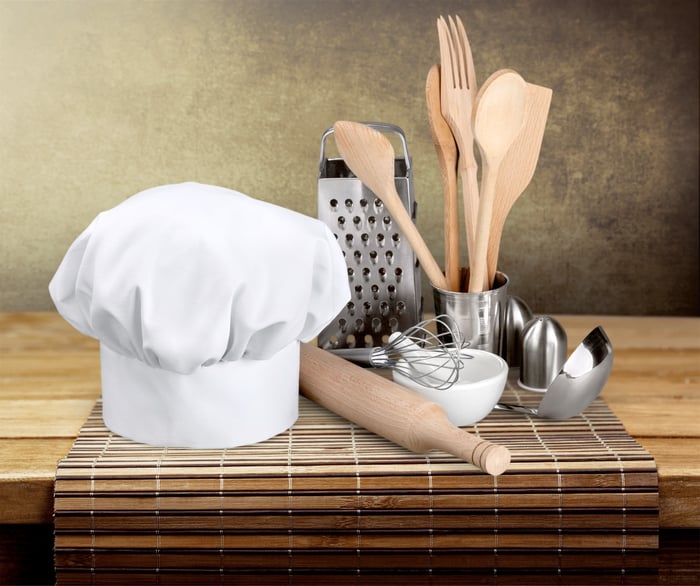 Chefs' Warehouse's third-quarter results were representative of what the food industry has seen lately. Revenue climbed almost 8% to $297.9 million, which was only slightly slower than the 9% growth that investors had expected to see. Net income fell by three-quarters from year-ago levels, however, and even after making pro forma adjustments, adjusted earnings fell by two-thirds to $0.07 per share, falling $0.01 per share short of the consensus forecast among those following the stock.

Looking more closely at Chefs' Warehouse's numbers, most of the company's revenue growth came from its recent acquisition of M.T. Food Service in June. When you look only at organic growth, Chefs' Warehouse only managed to see revenue climb 2.2%. Fundamentally, case counts were up 7.5%, while unique customers and placements rose between 5% and 6% each. However, as we've seen in previous quarters, food price deflation was a negative impact, weighing in at 2.2% overall and hitting the company's protein division even harder. Moreover, pounds of protein sold fell 1.8% compared with the year-ago quarter.

Chefs' Warehouse also saw weakness in its margin figures. Gross margin fell almost half a percentage point to 25%, with the company citing problems with the integration of the Del Monte business and trouble passing through beef costs to customers. Operating expenses also climbed substantially, and the 15% rise ended up hitting operating margin by almost 2 percentage points to 2.8%.

Even with the challenges, CEO Chris Pappas remained upbeat about Chefs' Warehouse. "Despite the continued soft industry backdrop and deflationary trend in food costs," Pappas said, "our business model continues to demonstrate our ability to take share." The CEO was also pleased with how well the company has dealt with the transition to a new enterprise resource planning software, and he believes that Chefs' Warehouse will be in a better position to grow going forward.

Chefs' Warehouse also believes that some longtime headwinds are finally starting to abate. As Pappas said, "we are also pleased with our progress at Del Monte during the third quarter," and he believes that "much of the heavy lifting" is already done, opening the door to take advantage of new opportunities as they arise.

Accordingly, Chefs' Warehouse updated its guidance for the full year. The company now expects to bring in revenue of between $1.185 billion and $1.195 billion, which is actually slightly better than most investors are currently expecting. Chefs' Warehouse believes it will post a GAAP loss of $1 million to $2.5 million, but on a modified pro forma basis, guidance for adjusted earnings of $0.41 to $0.46 per share would be well below its projections from earlier in the year, although it would be consistent with the current consensus forecast.

Chefs' Warehouse stock didn't immediately react to the news, not moving substantially in the after-hours trading session following the announcement. Regardless of how the stock reacts immediately, what long-term Chefs' Warehouse investors need to focus on is whether the company can recover when demand from the restaurant industry bounces back. By setting itself up for success now, Chefs' Warehouse will be in a better position to capitalize when industry conditions improve.