After a difficult fiscal 2016, the industrial company is setting itself up for improvement in the coming year.

Most companies with heavy exposure to the oil and gas industry have had a difficult year in 2016, and Emerson Electric Co. (EMR 3.37%) is no different. The recent fourth-quarter results revealed yet more sales and order declines, but CEO David Farr has been busy restructuring in order to position Emerson Electric for future growth. It's time to analyze the results and outlook from the company's latest earnings report.

Starting with the headline numbers from the fourth quarter and full year (note that Emerson's fiscal year ends on Sept. 30):

The fourth-quarter earnings were pretty much in line with management's forecasts given at the time of the third-quarter call. However, that conclusion shouldn't detract from just how far away the final-year outcome was, compared to where management felt it would end up.

It's a good idea to take a step back and compare the full-year forecasts at the time of the first-quarter call with what transpired:

What happened with Emerson Electric Co. in fiscal 2016

While the fourth-quarter numbers were OK, it's clear that conditions have deteriorated as the year has progressed. The company has had two related problems. First, energy-related capital spending has consistently disappointed expectations -- Emerson is far from being alone in this -- and industrial production growth forecasts have been downgraded. Farr started his first-quarter earnings call in February by declaring “a global industrial recession,” and if anything, conditions have gotten worse.

The second issue is that Emerson's exposure to parts of the industrial economy experiencing bright spots -- data-center spending, telecom infrastructure, and global heating, ventilation and air conditioning (HVAC) -- is not enough to offset weakness in energy and general industrial spending.

The following chart shows a breakout of segmental earnings for the remaining businesses -- the network power segment is being sold off. As you can see below, the relative strength in climate technologies and commercial and residential solutions isn't enough to offset weakness in process management and industrial automation. 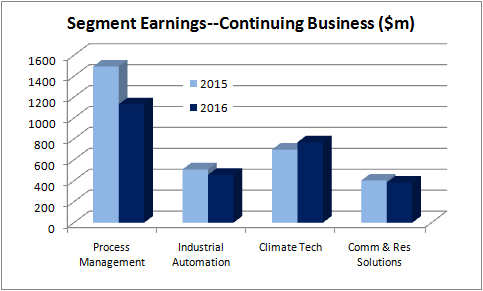 While there is little management can do about end-market conditions, Farr deserves considerable praise for keeping margin up in the face of deteriorating sales. Thanks to a combination of restructuring and cost cuts, “fiscal year operating margin remained high at 16.9%, down only 40 basis points from the prior year,” according to the earnings release. (For reference, 100 basis points equals 1%.)

However, margin pressure appears to be building. For example, in response to a question from Sanford Bernstein analyst Steven Winoker, Farr responded: "[I]n order to hold our margins and improve our profitability next year, we're going to have to come up with more stronger discretionary cost savings, because I think price-cost will be working against us."

Going into 2017, Farr is carrying out a two-part strategy to generate value for investors. The first is execution of the restructuring plan whereby the company will be split into two platforms. "Automation solutions" will comprise process management and the remaining industrial-automation business (divestitures have been made) and "commercial and residential solutions" will comprise the existing business alongside climate technologies.

The second is to use strategic acquisitions -- such as the impending purchase of Pentair's valves and controls business -- in order to generate growth.

Guidance is for overall net and underlying sales to decline 3% to 1%, with automation solutions down 7% to 4%, but the commercial and residential solutions segment is forecast to grow 2% to 4%. Obviously, the key question is: When will automation-solutions orders start to improve?

Farr's prediction is that orders won't turn positive until late fiscal 2017, but will start to get better in "the early calendar year of 2017" -- a key marker investors will want to look out for.

Lee Samaha has no position in any stocks mentioned. The Motley Fool recommends Emerson Electric. Try any of our Foolish newsletter services free for 30 days. We Fools may not all hold the same opinions, but we all believe that considering a diverse range of insights makes us better investors. The Motley Fool has a disclosure policy.