There are few revenue streams that are as resilient as Magellan Midstream Partners' (NYSE:MMP). Thanks to another solid operating quarter, management felt confident to raise its guidance for distributable cash flow for the second time this year. Let's take a quick glance at Magellan's most recent quarter to see how it was able to keep the good times going in a tough commodity market.

What else is there to say about Magellan's results other than that they are extremely steady? The company's EBITDA and cash flow continue to grow steadily. In fact, management increased its distributable cash flow guidance for the year from $910 million to $925 million thanks to the results from some of its new assets as well as a tariff rate increase on some of its regulated tariff refined product pipelines.

The one discrepancy with these results was in the company's refined product segment, which took a non-cash loss on some hedging positions for some of its commodity-exposed volumes. Conversely, that same segment realized a $55 million gain for the same reason in the third quarter of 2015. These two items don't show up in the company's cash flow, but they do appear in operating margins and earnings per share. Aside from that small difference, results across the board increased slightly as a couple of new projects came on line. 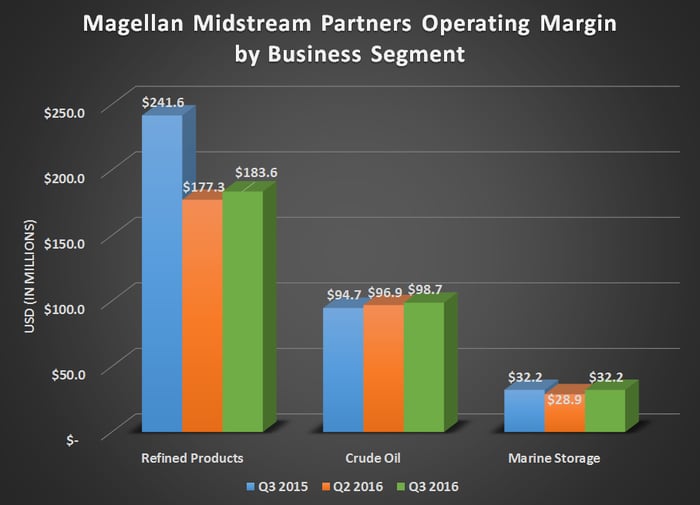 Magellan continues to deliver solid financial results while maintaining our focus on developing opportunities to grow our business in a disciplined manner. During the third quarter of 2016, we successfully started operation of the Little Rock and Saddlehorn pipelines, representing key infrastructure projects to deliver refined petroleum products and crude oil to important demand centers.

Magellan Midstream Partners' results were as predictable as always. For every small hiccup that could have led to a decline, new assets and tariff increases were there to offset those weaknesses. With Saddlehorn fully functional in the fourth quarter and the Corpus Christi condensate splitter coming on line next quarter, expect more of the same in a few months.