There were a lot of signs pointing to better times ahead for Hi-Crush Partners (OTC:HCRS.Q) and other frack-sand producers as of late. Rig counts have increased slightly, and producers have been talking a big game about how they can profitably produce at today's prices.

This quarter, we saw some of these signs actually translating into something tangible for Hi-Crush: higher sales and higher volumes. Let's take a look at the results for the company to see why it was able to raise sales, but profits still remain elusive.

There were a couple of positive signs in these results as revenue grew and losses narrowed ever so slightly in the quarter. The most positive of all was the 1.08 million tons of sand that were shipped in the third quarter. That's a 27% increase from the second quarter and signals that well completion activity has at least stopped shrinking and is possibly increasing.

We can't tell whether well completion activity has picked up, because sand volume per well has been steadily increasing recently. Therefore, it's not clear if the increase in sand usage comes from more sand per well or more total wells completed

The reason that Hi-Crush's revenue gains weren't as robust as volume increases is because the realized price declined for those tons shipped. Part of that has to do with an overall decline in sand spot prices, but it's also attributed to a change in sales mix. Fewer customers are buying on-demand loads of sand in the basin in which they operate, and are instead buying with longer-term contracts, a slightly lower-volume business.

The reason that these gains in volume and modest upticks in revenue didn't translate to a profit is because there were some higher costs associated with restarting operations at a couple of mines and mobilizing equipment.

The two things of note that happened this past quarter was the acquisition of the Blair, Wisconsin facility from its general partner Hi-Crush Proppants LLC. In doing so, the company no longer needs to buy sand from this facility as a third-party transaction and should ultimately lower production costs. The company funded the $85 million, in part, with cash it raised from an equity raise, as well as directly issuing shares in Hi-Crush to the seller.

While it's probably better that the company use equity to make such purchases, as debt is the last thing it wants to take on right now, Hi-Crush has done an awful lot of shareholder dilution this past year, and that will make it harder to get back to paying a decent distribution to shareholders. 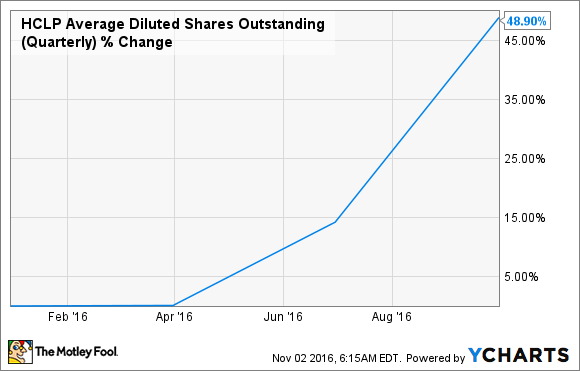 Activity levels with our customers increased across the board during the third quarter, resulting in a 28% sequential increase in our volumes of frac sand sold. Our continued focus on profitable market share and efficiency across our operations was evident in our results for the quarter. EBITDA moved closer to breakeven when adjusting for one-time costs associated with business development activities and the Blair drop down, as well as removing railcars from storage to service growing sand volumes. Proppant intensity trends and other factors that support improving demand for frac sand are expected to continue through the end of the year and into 2017, even when taking into account offsets from typical seasonal factors.

Things are starting to look up for Hi-Crush Partners. The company's moves to cut costs and shore up the balance sheet have staved off any potential solvency issues that were front and center a few quarters ago. Now that drilling and completion activity in the U.S. is starting to stabilize, and the amount of sand per well has more than doubled over the past couple of years, it's looking as though this recent volume bump could be the first of a few quarters of gains.

Still, as a master limited partnership, the company is still not generating any cash that can be distributed to shareholders, and any new distribution policy will likely be a much lower per-share amount because of all the newly issued shares this past year. So investors should know going into this that they shouldn't expect the high yields they previously saw with this stock coming back any time soon.