You have to give credit when it's due, and Calumet Specialty Products Partners (NASDAQ:CLMT) does deserve some for its efforts to control costs and show improved performance from its various segments. The company, however, still hasn't improved its results enough to address its most pressing concern: its debt.

Let's take a look at Calumet Specialty Products Partners' results for the most recent quarter and see how far along its turnaround story is.

In some ways, the company started to show some incremental gains even though the market for refining continued to cause headaches for everyone that refines oil. This difference is most notable in its fuels segment. Even though crude oil prices were on the rise and the costs to comply to the U.S. EPA Renewable Fuels Standards have been unusually high, the company was able to eke out a modest gain on an adjusted EBITDA from this business.

A large part of that has to do with shedding its interest in Dakota Prairie Refining, which was the equivalent of lighting dollar bills on fire for the company. Without it on the books, it is generating some modest profits here. Even its oil-field services segment was able to lower its losses as drilling activity in the Permian Basin -- where Calumet's oil-field services business has most of its assets -- picks back up again.

The one stain on the results was a rapid decline in the specialty products segment, Calumet's bread and butter. Even though the company was able to raise sales prices on its specialty product prices last quarter, higher crude and other input costs increased even more to offset those gains.

Overall, management saw all of this as mostly positive, as the company surpassed its target goal of $60 million to $75 million in adjusted EBITDA for the entire fiscal year of 2016 in just three quarters. Calumet did generate $10.4 million in cash that, as a master limited partnership, would qualify as distributable cash flow. Management made the smart decision, however, to not pay out shareholders and focus on cleaning up its financials. 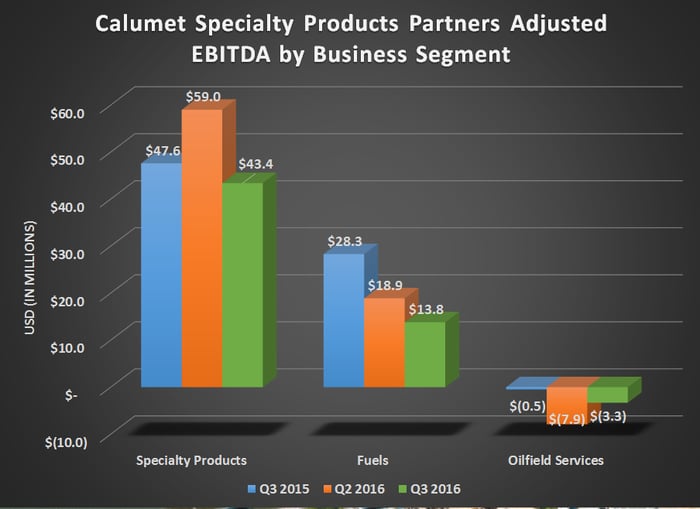 As much as small gains are being made here, the company has to pretty much given them all back because of the higher interest expenses it has to pay. Interest expense was $44.6 million this past quarter, an increase of 75% year over year. Management did say it repurchased $20 million worth of debt, but its total debt load is still higher than this time last year and stands at $1.98 billion.

After what has seemed like more than a year of change and uncertainty, CEO Timothy Go's outlook for the near-term future was much more stable than what Calumet has been used to. He said:

Looking ahead to the fourth quarter 2016, we expect to see typical seasonality across our businesses. We are encouraged that the price increases from the end of the second quarter within our specialty products segment have generally held firm, which should allow us to at least partially offset some of the recent increase in crude oil pricing since that time. Within our fuel products area, we anticipate that normal winter patterns will likely pressure refining economics during the period. We also expect to see our oilfield services segment continue to leverage its solid position in the Permian basin and continue its healing process. Lastly, our operational excellence teams will remain diligent in their pursuit of new ways to optimize our platform as they have recently turned their focus to driving improvements in our transportation and procurement functions across the organization.

It's encouraging to see Calumet make some gains on the operations side of the business with some cost cutting and a renewed focus on generating returns. The big issue is that the final hurdle it needs to overcome to return to profitability and pay shareholders a distribution got much higher with those onerous interest payments. Even if investors see some promise in Calumet's potential turnaround, it will take a long, long time for that story to play out. So it's probably best that investors stay on the sidelines a while longer until Calumet has it all figured out.