Rising silver prices during the third quarter were a boon to Great Panther Silver (NYSEMKT:GPL), which reported hearty growth in earnings and cash flow compared to the prior period. This improvement came despite the fact that production slumped double digits because of a range of issues at its mines. While the company still has some production challenges to overcome, its finances are in excellent shape, which should help get it through any potential turbulence that could roil the precious metal markets over the next few months.

Cashing in on peak prices 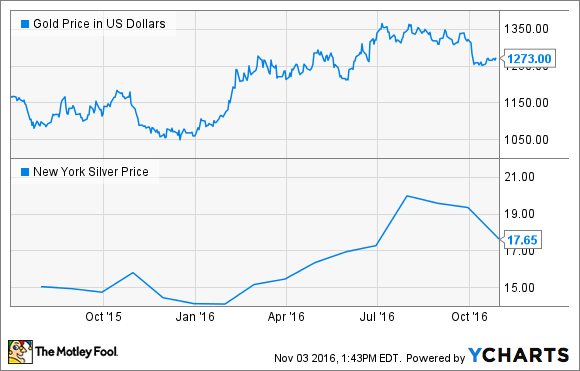 As that chart shows, silver and gold were at their pinnacle during the third quarter. Those peak prices helped Great Panther more than overcome a 12% decrease in metal production over last year's third quarter, resulting from lower gold ore grades at the Guanajuato Mine Complex and a reduction in production at the Topia Mine thanks to two temporary shutdowns during the quarter. Another factor that offset weaker production was the company's ability to push its all-in sustaining costs (AISC) down by 8% per ounce.

Great Panther's robust financial results bode well for fellow silver producers Silver Wheaton (NYSE:WPM) and First Majestic Silver (NYSE:AG), which both report third-quarter results next week. First Majestic Silver will likely report an exceptional quarter after it already announced record third-quarter silver production of 4.5 million silver ounces equivalent. Meanwhile, like Great Panther, First Majestic has done a tremendous job of pushing its costs down, evident by the fact that its AISC were down 24% year over year in the second quarter. Meanwhile, Silver Wheaton has already locked in low costs thanks to its streaming agreements, so the rise in the price of silver during the quarter should drive a significant increase in its cash flow. In addition to that, Silver Wheaton's gold production is expected to rise after it acquired another stream during the quarter.

Prepared for whatever lies ahead

While the third quarter was an excellent one financially for Great Panther Silver, the outlook for the near term is a bit cloudy. The price of both silver and gold have come off of their peaks because of concerns that the U.S. Federal Reserve will raise interest rates this fall, which could reduce demand for precious metals from investors because it makes yield-bearing investments more appealing. That said, given tame inflation, weak economic growth, and macroeconomic concerns, it's possible that the Fed could take its time. Meanwhile, the upcoming U.S. election has the potential to throw global markets into a tailspin if the outcome is not as expected, which could cause precious metal prices to spike. Suffice it to say: Precious metal prices could be volatile in the upcoming months.

Amid that backdrop, Great Panther Silver has its own uncertainty. During the third quarter, the company began construction on the Topia tailings dam Phase II. However, because of permitting delays, the company might not meet its production guidance for the fullyear. As things stand right now, it needs to produce at least 1 million ounces of silver equivalent during the quarter just to meet the low end of its guidance range (and 1.1 million to meet the midpoint). That output level could be tough to achieve considering the company only produced 953,632 ounces of silver equivalent last quarter and an average of 1 million ounces per quarter this year.

That said, despite the potential uncertainty surrounding silver prices and production next quarter, Great Panther has an excellent balance sheet these days. In fact, thanks to its rising cash flow, and an equity issuance in July, the company has a debt-free balance sheet. That certainly provides it lots of security amid what could be a tougher quarter.

Great Panther Silver turned in a great third quarter thanks to rising precious metal prices and falling costs. That enabled the company to overcome sinking production. Meanwhile, with a debt-free balance sheet, Great Panther Silver is in a strong position as it maneuvers through whatever lies ahead.