Sam Adams Lager maker Boston Beer Company (NYSE:SAM) still hasn't figured out that it isn't a "craft" brewer anymore. It continues to take the artist's high road and create new craft offerings in-house. Meanwhile, micro-brewers and neighborhood pubs are capturing enthusiasts' interests, and big brewers such as AB InBev (NYSE:BUD) are gobbling up the mass market through acquisitions of SAB Miller, other regional brewers, and, more recently, a home-brew purchase.

Sales are fizzling out

Boston Beer shares are now half the price they were in early 2015, and it still doesn't look like a bargain, with the company's most recent quarter showing another drop in beer shipments of 12% and revenue falling 14% from the same quarter last year. Depletions, or beer shipped from distributors to end consumers or retailers, also fell 6% during the quarter. 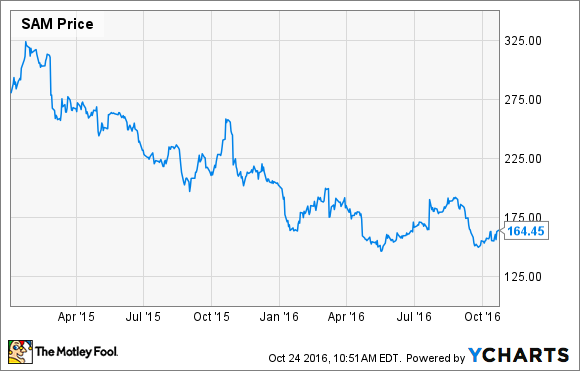 The bad news comes on the heels of reported losses for the better part of a year now. Nevertheless, shares nudged up anyway as management stated that a review of brand strategies is under way, as well as an increased focus on cutting costs. Not exactly what you want to hear from a company with high growth expectations priced into shares, but it was a much-needed scrap for investors to chew on.

Consumer trends on the move

In the 1970s, the number of total U.S. brewers numbered as few as 100. At the end of 2015, that number had skyrocketed to more than 4,200. That's impressive growth, and the totals are still increasing. The numbers underline the resurging American interest in the hometown, or even home-neighborhood, brewpub or taproom, as many of the upstarts operate as local hangouts and gathering places.

Boston Beer management has admitted that the explosion of small competition is indicative of changing consumer trends. Beer drinkers have been trending toward smaller brewers in search of new and creative drinks. Management has also acknowledged the Brewers Association, a non-profit economic organization that represents the craft-beer industry, which says trends are shifting toward smaller and local consumption.

Big non-craft companies have noticed the changes in consumer preference and have taken action. Consolidation and acquisitions have been the big news for the past few years now. Budweiser maker AB InBev completed its merger with SABMiller and has also purchased eight craft brands in the past five years. Not content with the mass market, AB InBev also recently purchased DIY-brew supplier Northern Brewer.

While AB InBev's move to buy up market share and control distribution of beer was something regulators partially addressed during the SABMiller deal, the moves in recent years still put the world's biggest brewer in the driver's seat of the mass market. However, Boston Beer management attributes lost market share to increased distribution from smaller players, citing that distribution for small brewers has been tightening as of late and that it will eventually stall.

I disagree, as this assumption doesn't account for bigger brewers that are buying out smaller ones and inserting them into their large existing distribution networks. Add to that the continuing interest in local consumption at taprooms, brewpubs, and DIY homebrews. Boston Beer is stuck in the middle of a two-front war, and it's currently losing.

It's time for the Boston Beer Company to shift gears. The company's internal efforts to generate growth aren't cutting it. I can understand the desire to stay true to "craft" beer roots, but the company opted to play the perpetual growth game and went public years ago, and shareholders demand profitable growth. It might be time to purchase a small rival brewer or two and plug them into the existing Sam Adams family.

The good news is that management said it was doing a review of its strategy during the last earnings report. But until the company comes up with a plan, I'm not interested in buying.