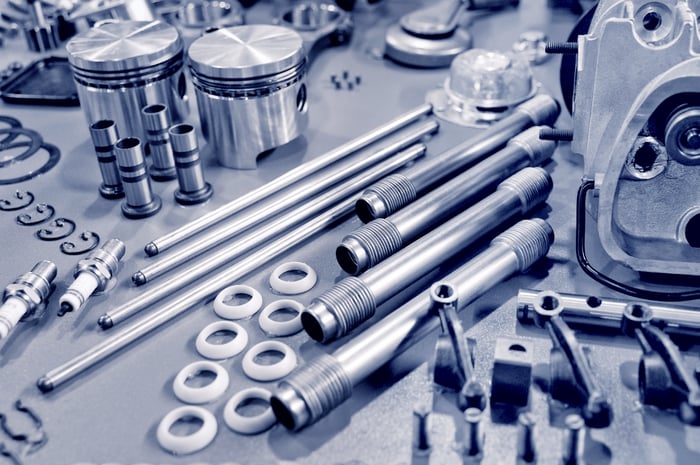 It's been quite a morning for American Axle & Manufacturing Holdings Inc. (NYSE:AXL), a leading supplier to the automotive industry and a worldwide leader in manufacturing, engineering, design, and validation of driveline and drivetrain systems for trucks, SUVs, cars, and crossovers. Not only did the company announce its third-quarter results, but it also revealed that it would acquire Metaldyne Performance Group Inc. As of 11:50 a.m. EDT, shares of American Axle are down 14%, while Metaldyne shares are up 42%.

Starting first with American Axle's third-quarter highlights, the company generated top-line revenue of $1.01 billion, right in line with analysts' estimates and ahead of last year's $971 million. American Axle's net income during the third quarter was $61.7 million, up slightly from last year's $60.9 million. That equates to earnings per share of $0.78, a penny ahead of analyst estimates.

Despite a better-than-expected third-quarter profit, shares of American Axle declined as it agreed to acquire Metaldyne, but that doesn't mean it's a bad move.

American Axle will acquire Metaldyne for approximately $1.6 billion in cash and stock, plus the assumption of $1.7 billion in net debt; American Axle will pay $13.50 in cash per share to each Metaldyne shareholder, as well as 0.5 share of American Axle common stock. For American Axle, the purchase is at an implied multiple of 6.8 times adjusted EBITDA, based on 2016 estimates, and an even lower 5.5 times multiple when including synergies. Financially, American Axle expects the acquisition to be accretive to earnings and free cash flow during the first full year of ownership and that cost synergies should be between $100 million to $120 million annually by 2018.