For years, RPX (NASDAQ:RPXC) has offered its patent protection services to try to deter patent trolls and troublesome litigation. Yet with all the challenges of that business, RPX branched out in a different direction, and coming into Thursday's third-quarter earnings report, RPX investors were hoping that the new discovery services business would help power a new wave of growth for the company.

RPX delivered on that front, with solid sales and net income gains that might not have appeared if the company had stuck solely with its patent-related business. Let's take a closer look at the latest from RPX and whether positive momentum will continue. 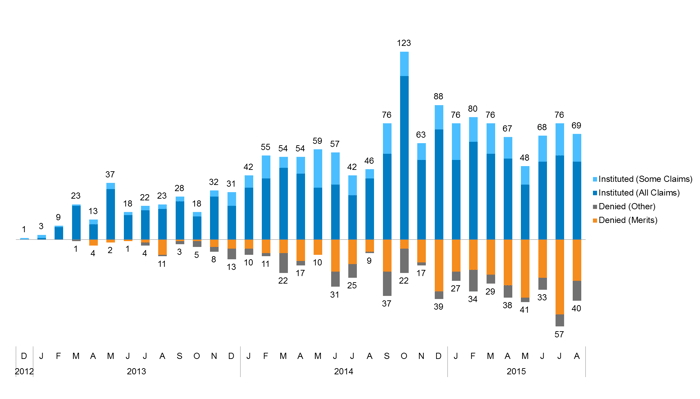 Inter partes review has become more popular as a way to look at patent issues, but even though success rates are falling, RPX still believes that potential defendants can benefit from its patent protection services. Image source: RPX.

RPX's third-quarter results looked good and pointed to renewed growth. Revenue jumped by nearly 30% to $88.5 million, and that was even faster than the 27% growth rate that most investors were looking to see. Similarly, adjusted net income climbed by a fifth to $12.7 million, and that produced adjusted earnings of $0.25 per share. That was $0.02 per share higher than the consensus forecast among those following the stock.

Taking a closer look at how it did operationally, RPX kept moving ahead, albeit with some headwinds. The company kept bringing in new clients for its patent business, but the pace of those additions slowed during the quarter, with only 11 new net additions. That brought RPX's total to 328 clients. Spending bounced higher from fairly weak numbers earlier in the year, with RPX spending $34.8 million net on 23 different patent transactions.

Financially, the discovery business benefited at the expense of subscription revenue from patent protection. Discovery services brought in $18 million in revenue, or well over a fifth of the company's total sales. Fee-related revenue was also invaluable, providing $8.1 million in incremental revenue compared to a negligible amount last year. By contrast, the subscription revenue side of the business saw its top line fall by more than 8%.

CEO John Amster seemed happy with how RPX did during the period. "Revenue in our patent risk and discovery businesses was in line with expectations," Amster said, and "we had an active quarter of patent acquisitions while carefully controlling our operating costs.

What's next for RPX?

In addition, RPX thinks that there are even more chances to find growth in the future by looking at how the discovery and patent protection businesses interact. In Amster's words, "As we integrate the two businesses, we continue to assess new opportunities to provide services that can enhance the operational efficiency of corporate legal departments." In other words, by getting its foot in the door with patent protection, RPX hopes to provide a more complete suite of valuable services to enhance its value proposition.

Yet RPX's latest guidance could give some investors pause. For the fourth quarter, RPX expects revenue of $82 to $86 million to produce adjusted net income of $7 million to $10 million, which works out to roughly $0.14 to $0.20 per share. That's on the low side of investor expectations, although it conservatively assumes that fee-related revenue will almost entirely disappear.

For the full year, RPX's guidance changes were also noteworthy. The company is now predicting that total revenue will come in between of $333 million to $337 million, which is toward the lower end of the range that RPX issued nearer to the beginning of the year. Adjusted net income of $37 million to $40 million would work out to roughly $0.72 to $0.78 per share, which is entirely consistent with current investor expectations for $0.75 per share.

RPX stock didn't react in after-hours trading following the announcement, but the most important thing for investors to watch going forward is how well RPX's discovery and other ancillary businesses work out. In the long run, RPX might end up making more money outside its core patent protection area if it can identify valuable services that its customers truly need.