Electronic Arts (NASDAQ:EA) saw its fiscal second-quarter sales rise along with the continued success of its blockbuster sports and combat-based games.

Revenue rose 10% year over year to $898 million, with the video game company's $566 million in high-margin digital sales comprising 63% of total revenue during the second quarter. That helped gross margin increase to 55.3% -- a 5.5-percentage-point improvement compared to Q2 2016 -- and furthered a multiyear trend of rising gross margins. 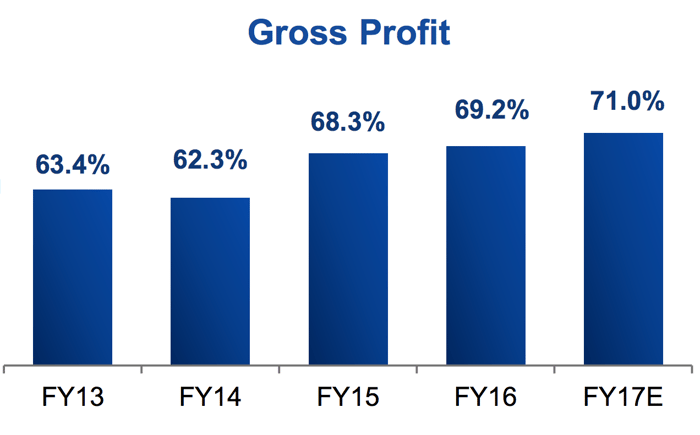 The company's EA Sports division continues to drive results, with highly profitable sales in the "Ultimate Team" modes of stalwart franchises FIFA, Madden NFL, and Hockey rising 15%, collectively, over the past year. In all, more than 43 million players engaged with EA Sports games across consoles and mobile devices in the second quarter.

Importantly, Electronic Arts' mobile business was again a bright spot, with mobile sales jumping 21% year over year to $149 million. Results at Star Wars: Galaxy of Heroes was particularly strong, with average gameplay per player remaining steady at an incredible 2.5 hours per day in Q2.

Additionally, Electronic Arts is off to a fast start in Q3, with the recent launches of combat-based games Battlefield 1 and Titanfall 2. In fact, CEO Andrew Wilson said Battlefield 1's player engagement has been "phenomenal," with its first week total player base coming in at nearly double that of a previous version of the game.

For the third quarter, Electronic Arts expects to generate revenue of approximately $1.125 billion, with a net loss of $53 million, or $0.17 per share.

In addition, Electronic Arts raised its full-year revenue outlook to $4.775 billion from $4.75 billion, and boosted its net income forecast to $848 million, or $2.69 per share, compared to prior estimates of $809 million and $2.56 per share. The company also reiterated its guidance for full-year operating cash flow of approximately $1.3 billion.

"We are in an outstanding position for the quarter ahead, with two of the highest-rated games of this console generation in Battlefield 1 and Titanfall 2, global competitive gaming tournaments under way, and our first virtual reality experiences coming soon," added Wilson. "Across all platforms, this holiday season will be a fantastic time to play."