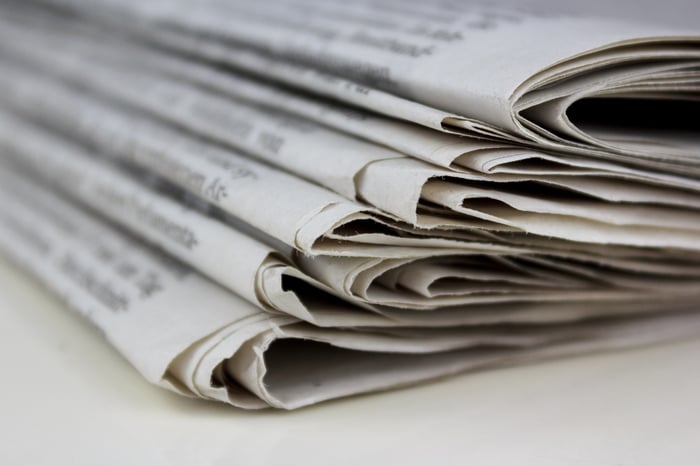 The New York Times (NYSE:NYT) saw a sharp drop in third-quarter profits as its print advertising operations continued to suffer from falling demand. Yet the renowned newspaper was able to deliver accelerating revenue growth in its digital business.

Total revenue fell 1% year over year, to $363.5 million, as a 7.7% decline in advertising sales more than offset a 3% rise in circulation revenue and a 1% increase in other revenues.

"This quarter proved yet again that The New York Times has a very compelling digital revenue story to tell," said CEO Mark Thompson in a press release. "We saw exceptional gains in our digital consumer business, with a net increase of 116,000 subscriptions to our news products, more than twice as many as the same quarter last year and far more than any quarter since the pay model launched in 2011."

The Times is increasing its investments to support the growth of these digital initiatives, while at the same time realigning its resources in regards to its dwindling print business. In turn, operating costs grew 3.2%, to $356.6 million, due, in part, to higher technology and severance costs, which were partially offset by lower print production and distribution costs.

All told, operating profit -- adjusted to exclude depreciation, amortization, severance and retirement costs, and other special items -- dropped 18%, to $39.2 million. And adjusted EPS from continuing operations fell to breakeven from $0.06 in the prior-year period.

For the fourth quarter, The New York Times expects total circulation revenue to increase -- and total advertising revenue to decrease -- at rates similar to those of the third quarter. In addition, operating costs are projected to increase "in the mid- to high-single digits" on a year-over-year basis.

"We expect print advertising to remain challenged in the fourth quarter and while we will continue innovating and investing where we think it makes sense, we will remain focused on our cost structure and on rapidly growing our digital business," said Thompson.