Ferrellgas Partners, L.P. (OTC:FGP) had long been a reliable "dividend stock." Although this limited partnership's distribution was stuck at $2.00 a share for more than a decade, it didn't go down, either. So investors looking for a steady stream of distributions were well rewarded by owning it. Now, however, that could all change, leaving unitholders to ask whether Ferrellgas is going to sink or swim.

There's no way to put Ferrellgas' late September news releases in a good light. The first release was fairly brief, announcing that the partnership had fired its CEO and replaced him, at least temporarily, with James Ferrell, the company's founder and current board chairman.

The second new release, the company's full-year fiscal 2016 earnings, explained why. In recent years, Ferrellgas has shifted gears, adding oil and gas midstream assets to its core propane delivery business. It now appears that this move didn't live up to the growth promises held out when the previous CEO was inking deals.
The partnership took a nearly $660 million impairment charge in its new midstream business, pushing fiscal 2016's bottom line deep into the red. The company's two biggest acquisitions on the midstream side were Sable Environmental, which was the foundation of its midstream business, and Bridger Logistics. Together the two cost roughly $960 million. In other words, Ferrellgas just wrote off around 70% of the value of these two deals.
If that weren't bad enough, the company also announced that it's "focused on the reduction of its debt and leverage ratio" and added, "One tactic under consideration is a reduction in our quarterly distribution." Management didn't mince words, either, suggesting that the distribution might go from $2.05 a share per year to just $1.00. In other words, if you're a unitholder, look for a distribution cut of more than 50%. 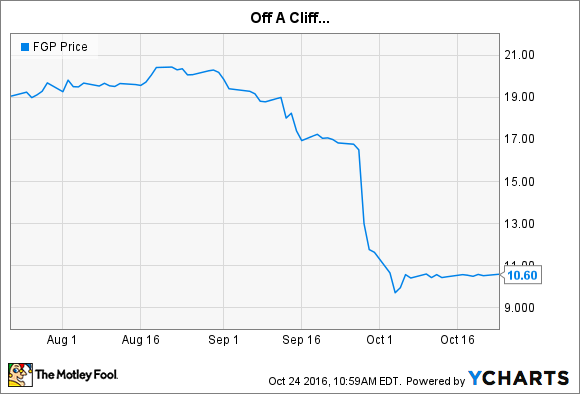 It's no wonder the price plummeted from nearly $17 a share before the announcement to less than $10 afterward. Recently, the units have been trading hands at a little under $11.

So that's the bad news, and it's pretty bad. But the damage has been done, and the future is what's important. First off, the nearly 20% yield is highly unlikely to survive -- expect it to be half of that amount. But then what happens? There are a few options for Ferrellgas.
It could use its cash-cow propane business to pay down debt, which stands at roughly $1.9 billion -- up from $1.2 billion in January 2014, before it started buying midstream assets. The company pretty much has to focus on debt reduction at this point because it is at risk of violating some credit covenants. That said, it has entered into amendment agreements that give it roughly a year and half of extra breathing room.
Using the cash cow propane business to reduce debt was basically the idea behind the expansion into midstream anyway. Only midstream was supposed to add to the top and bottom line, too. So if Ferrellgas intends to stay the course, the partnership will use its core business to pay down debt and help fund its efforts to turn its new assets around. The distribution cut, of course, is the main way it plans to increase the cash it has around. 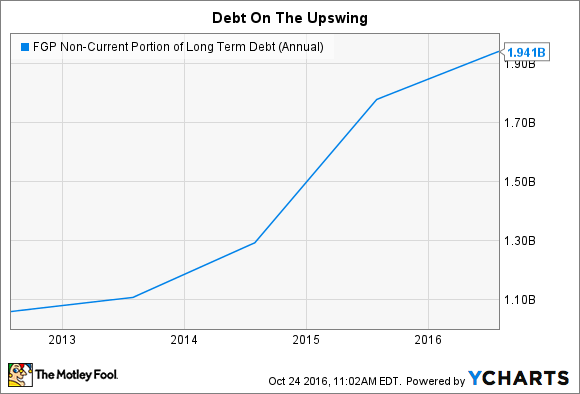 The other option is for Ferrellgas to sell the midstream businesses it just acquired. Since the CEO who orchestrated those purchases is out, this could be a quick and easy way to help reduce debt. The only problem is that, based on the writedowns, the company wouldn't get nearly as much as it paid.
In fact, a key customer of Ferrellgas' midstream business is, well, no longer a customer. And that means the midstream business may be worth even less than what the write down implies if the company tries to sell it. In other words, unitholders would still be left footing a big portion of the debt-reduction bill through the distribution cut. The upside would be that a big management distraction would quickly go away.

Basically, there's no good answer for getting out of this mess. However, here's an important piece of the equation: Founder and current CEO James Ferrell owns nearly 5% of the partnership, and the company's employee stock ownership plan owns just over 23%. So there are a lot of reasons the company and its employees will want to get Ferrellgas moving in the right direction again.
So my guess is that Ferrellgas does, indeed, swim again. However, investors are going to have to be patient as it gets back on the right track. It won't be easy, and it's going to take a big bite out of the distribution. But once debt is reduced and the cash-cow nature of the propane business starts to shine through the haze, look for that disbursement to move back toward its historical level.
This article represents the opinion of the writer, who may disagree with the “official” recommendation position of a Motley Fool premium advisory service. We’re motley! Questioning an investing thesis -- even one of our own -- helps us all think critically about investing and make decisions that help us become smarter, happier, and richer.