Investors didn't get a lot of clarification during a Monday conference call about what a merger between Tesla Motors (NASDAQ:TSLA) and SolarCity (NASDAQ:SCTY.DL) would look like, but Elon Musk made one thing clear: he's not hedging his bets on SolarCity, and will fully incorporate the company into Tesla. SolarCity won't be a subsidiary and won't be bankruptcy-protected in any way, so Tesla is, in a sense, hitching its wagon to SolarCity.

This is important for a number of reasons right now. One is that Tesla will take on any lumps SolarCity has in the next few years -- but another is that Tesla's solar strategy will be incorporated into one company, for better or worse. Depending on how you look at it, this could be good news or confirmation of your worst nightmare.

If Tesla completes the SolarCity deal and takes on the company's balance sheet it'll definitely be a weight over the next few years. As of the end of the second quarter 2016, there was $366 million in debt from a secured revolving credit facility, $230 million of convertible debt payable in November 2018, and $566 million of convertible notes due in December 2020. In total, Tesla would be taking on $1.5 billion in recourse debt and total debt of $3.2 billion. 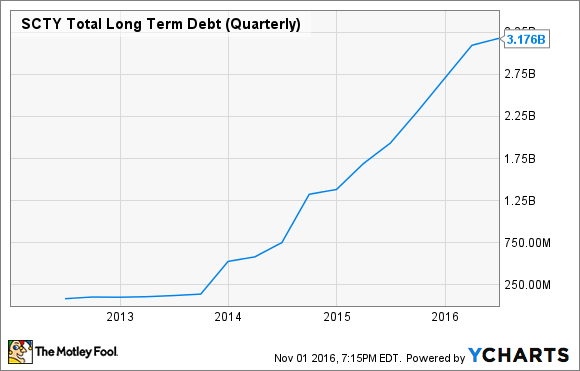 What's complicated about SolarCity's financials is that they include debt to fund the business and debt to finance contracted cash flows. That's why there's recourse and non-recourse debt reported. But the $1.5 billion that would become recourse to Tesla is nothing to sneeze at.

How SolarCity could work in Tesla's favor

The one number making the rounds in the media is that SolarCity is expected to contribute $500 million in cash to Tesla's operations in the first three years after the deal closes. That's a great projection, but keep in mind that SolarCity can't predict its own installation levels three months out, so making a prediction about what the solar business will look like in three years is a guess at best. Be cautious taking that projection at face value.

What works in Tesla's favor is that SolarCity is (finally!) moving to a cash or loan sales model rather than leases or power purchase agreements. Leases keep the rooftop solar assets on the balance sheet, but they also mean SolarCity has to constantly search for financing. If financing dries up it wouldn't take long for SolarCity's business to be in serious trouble. Loans mean the financial risk falls on banks, which assess risk for a living, and that cash comes in immediately.

The downside is that it will be much easier for customers to compare prices to those of smaller installers, which theoretically should be able to offer lower prices. Cash and loan sales take away a competitive advantage because it's difficult for a small installer to have the lease financing available to offer at a price competitive to that of SolarCity. But with a sale they can compete solely on cost. That could squeeze margins, even if it means SolarCity generates positive cash flow and isn't reliant on complex financing sales long-term.

This deal will be judged many years from now

Looking at all of the factors going into this merger, it's possible to make either a very strong case for the Tesla/SolarCity merger or against it, but the truth is that history will be the only good judge. If the two companies can be fully integrated and offer a more complete product and potentially better technology than competitors, it could be a huge success. But there's also a lot of financial risk in the near term as Tesla rolls the solar business in with EVs and energy storage.

What's clear is that Elon Musk isn't hedging his bets in acquiring SolarCity. He's taking on all the risk that comes with the company in an effort to build his renewable energy dream. I've got to tip my hat to someone making a huge bet to make that vision a reality.