There's been a lot of buzz in the tech world about virtual-, augmented-, and "mixed"-reality devices. All this talk about different digital "realities" is exciting, but it can also be confusing for investors who haven't been following these next-gen markets. Therefore, let's take a moment to review what those three markets actually consist of. 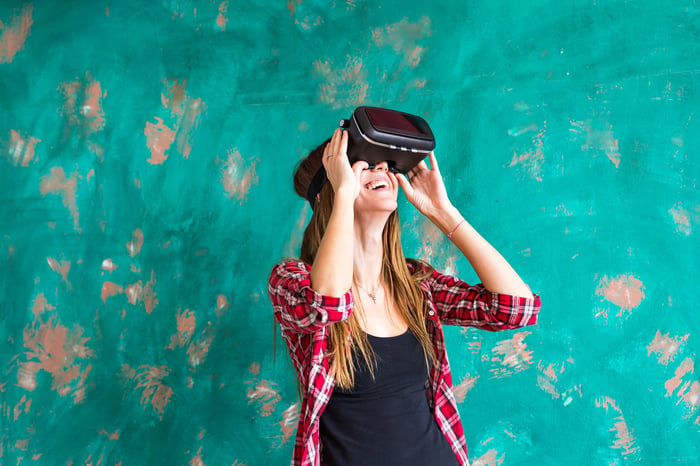 Virtual reality (VR) devices immerse a user in a virtual world, which mostly blocks their view and perception of the outside world. Tech M&A advisory firm Digi-Capital estimates that this market will grow from nearly nothing today to $30 billion by 2020. The hardware market mainly consists of tethered, mobile, and standalone devices.

Tethered VR headsets, such as Facebook's (NASDAQ:FB) Oculus Rift, HTC's Vive, and Sony's (NYSE:SONY) PlayStation VR, must be connected to a high-powered PC or gaming console. These devices generally offer the highest-end VR experiences and track a user's head position with optical sensors and lasers installed in "base stations" around the room. Microsoft (NASDAQ:MSFT) recently revealed several new tethered VR headsets that can track a user's head position by using internal sensors instead of base stations -- making it easier for multiple users to share the same physical space.

Mobile VR headsets, such as Samsung's Gear VR and Alphabet's (NASDAQ:GOOG) (NASDAQ:GOOGL) Google Cardboard, use smartphones as the "brains" of their devices. These devices are cheaper and less powerful than their tethered counterparts, but users' movements aren't restricted by wires or their proximity to a PC or console.

Standalone VR headsets aren't widely available yet, but they could strike a balance between the power of tethered headsets with the convenience of mobile ones. Oculus VR's upcoming Santa Cruz headset will free the Rift from PCs for a fully wireless experience.

Augmented reality (AR) devices project digital overlays over real-world objects. Niantic's Pokemon Go, which projects Pokemon into real-life environments with the smartphone camera, is an early example of AR gaming. Digi-Capital believes that the AR market could be worth $90 billion by 2020, thanks to the growth of AR apps on mobile devices.

In the near future, depth-sensing cameras will probably accurately place digital creatures onto real-world surfaces such as tables and floors -- paving the way for all new gameplay possibilities. Google Glass was also an early attempt to "augment" a user's reality with digital information, but it flopped because of privacy concerns.

Looking ahead, the most closely watched AR device is Microsoft's HoloLens, which detects surfaces and projects holographic images on top of them. Microsoft has already showcased how the device can be used for tabletop Minecraft, the creation of 3D designs, or even projecting a hologram of another person into your room. The development version of the HoloLens still costs $3,000, but it should cost a lot less when it's finally released to the general public.

Intel (NASDAQ:INTC) is also trying to reduce the price of these next-gen AR devices down with Project Alloy, an open-source standalone headset that also projects virtual objects onto real-world ones. That device is powered by Intel's RealSense depth-sensing camera and a sixth-generation Core processor.

Mixed reality (MR) is a newer term that's often used interchangeably with AR. Headsets such as the HoloLens and Project Alloy are often called MR devices because they "mix" VR features of head and motion tracking with AR features of digital overlays on real objects. Nonetheless, they can still simply be called AR devices because they "augment" users' reality without immersing them in a "virtual" world.

Watch the ecosystems and the suppliers

As these markets grow, battles between ecosystems will erupt. Facebook is already expanding its Oculus Home platform on the Rift and Gear VR, Google is introducing its rival Daydream platform, and Microsoft plans to turn Windows 10 into a holographic platform for its upcoming VR headsets and HoloLens.

Suppliers will also engage in fierce battles to provide the components. InvenSense, STMicroelectronics, and Bosch are battling each other to supply the gyroscopes and accelerometers that track users' movements. AMD and NVIDIA are already making gaming GPU cards much cheaper with low-end "VR ready" cards.

If all goes well, the combined VR and AR market might be worth about $120 billion by 2020. However, mainstream adoption could be tough if VR and AR devices are merely considered pricey toys for hardcore gamers and tech enthusiasts. Therefore, prices will need to drop and killer apps (on par with Pokemon Go) must emerge to pique the public's interest. If that happens, the VR market could become a new pillar of growth for many of the companies mentioned here.