World Wrestling Entertainment (NYSE:WWE) has staked a large part of its future on its streaming network. That means that every quarter, the most watched metric it reports when it delivers its earnings report will be the quarter-over-quarter subscriber growth.

The decline was not sharp and it was expected, but shareholders did not like the numbers. WWE stock opened October at $21.27 and closed it at $17.68. That's a nearly 17% drop according to data provided by S&P Global Market Intelligence. 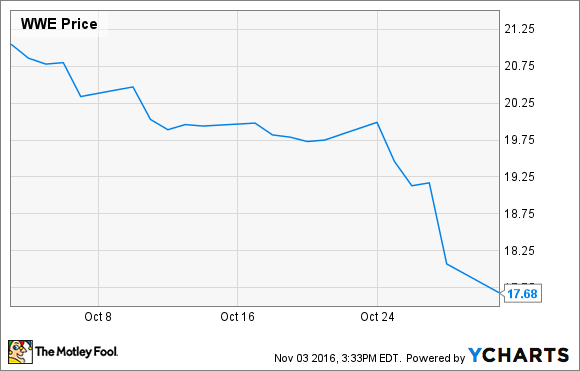 WWE wants investors to think that this number does not matter because Q3 network subscriptions have increased year over year. There is some validity to that, but with the streaming service still in its early days, any step backward is cause for concern. CEO Vince McMahon tried to deflect attention from the drop and focus on the positive in his remarks in the earnings release:

"During the quarter, we continued to effectively execute our content strategy, which has resulted in record revenues to-date in 2016 and increased consumption across our media platforms," he said. "This growth illustrates meaningful progress against our long-term strategic plan and provides the foundation for achieving our 2017 financial objectives."

The success of the WWE Network cannot be judged over a single quarter. The product will always have some volatility because the company allows people to join and quit with no penalty or benefit from skipping some months. That means that, in a quarter where the company has a larger-drawing event on the network -- be it Wrestlemania or another show that captivates less diehard fans -- numbers will go up.

The challenge is building a steady base, one that consistently replaces the revenue that WWE received before it moved its former pay-per-view specials to the streaming channel. This number was a disappointment only in that investors were hoping to see continued progress.