Stocks booked significant losses last week as earnings season ramped into high gear and investors dealt with increasing uncertainty surrounding the presidential election. The Dow Jones Industrial Average (DJINDICES:^DJI) and the S&P 500 (SNPINDEX:^GSPC) each lost over 1% to bring their year-to-date gains to below 3%. 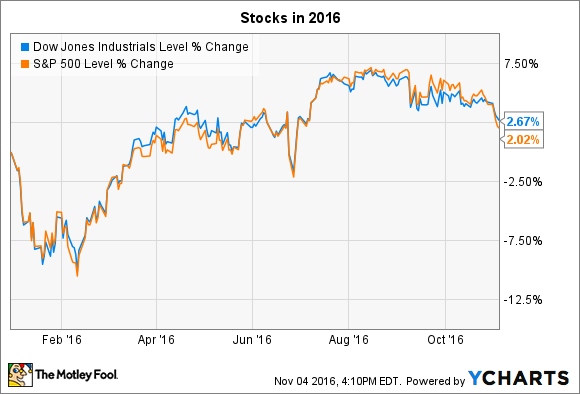 The week ahead promises plenty of opportunity for more volatility as voting results come in on Tuesday night. As for individual stocks, TripAdvisor (NASDAQ:TRIP), Disney (NYSE:DIS), and NVIDIA (NASDAQ:NVDA) shareholders are likely to see big moves in their investments tied to fresh earnings reports.

Expectations are low for TripAdvisor when it posts third-quarter results on Tuesday. Consensus estimates call for sales to rise by just 5% as profits only hold steady. That's in sharp contrast to Yelp, which last week posted a 30% sales increase on surging advertising volume for its review platform.

TripAdvisor hasn't been putting up growth numbers like that lately as its instant booking option weighs on results. Last quarter, in fact, revenue fell 8% in its hotel segment as the booking service rolled out globally.

CEO Steve Kaufer and his team have told investors that the growth slowdown is a short-term trade-off that will open the door for stronger, more profitable gains ahead. Shareholders should get an update on that forecast this week, and they'll be listening for management's latest thinking about whether 2017 will be an investing-focused year just as 2016 is shaping up to be.

Disney is limping into this week's earnings report as the second worst-performing stock on the Dow in 2016. Investors are fretting about a cash-cow media business that's slowing thanks to subscriber declines across the broadcast TV industry.

Media owners can succeed in this tough environment, though, as rival Time Warner showed last week when it announced healthy gains in both its TV and studio divisions. Like Time Warner, Disney is busy directing more of its content toward online platforms as viewers move away from traditional cable TV packages. However, it isn't clear if either company will enjoy the same profitability or steady revenue growth in these new distribution models.

Disney's profits are up by double digits over the last nine months, though. And the company has several promising growth avenues that don't rely on broadcast TV ratings, including a stacked film slate and its biggest park opening yet, in China. Investors should get more clues on Thursday about whether those initiatives will be enough to keep Disney on top through the disruption of its core media segment.

Investors are looking for plenty of good news from NVIDIA this week. The chip giant's results this year have been lifted by surging demand on several fronts that go beyond its core video gaming niche.

One of the biggest lately has been an automotive segment that doubled last quarter thanks to strong growth in autonomous car demand. NVIDIA also enjoys solid market positions in emerging areas like deep learning and artificial intelligence. And while there's no shortage of competition in its markets, the chip maker so far has managed to outgrow most rivals on its way to a 17% sales improvement over the last six months and a 23% spike in profits.

Investors have to pay up for performance like that: NVIDIA is valued at 44 times trailing earnings, which raises the bar for CEO Jen-Hsun Huang and his executive team to show continued positive momentum in third-quarter results on Thursday.