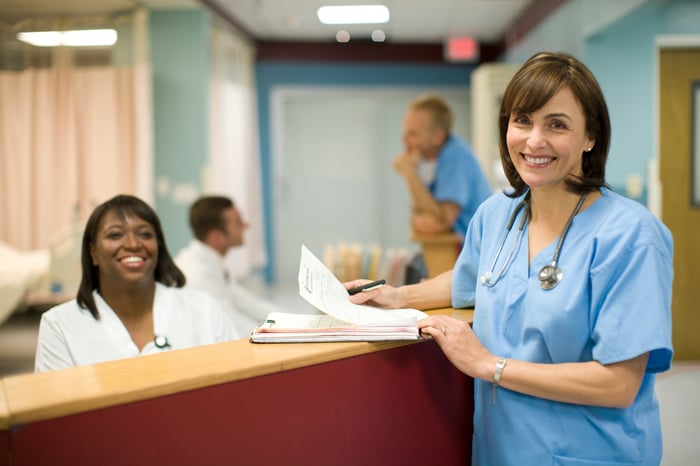 It hasn't been fun for Stericycle (NASDAQ:SRCL) investors this year. The stock of the medical waste disposal company has plunged more than 35%, underperforming both the overall market and traditional waste haulers such as Waste Management (NYSE:WM) and Republic Services (NYSE:RSG): 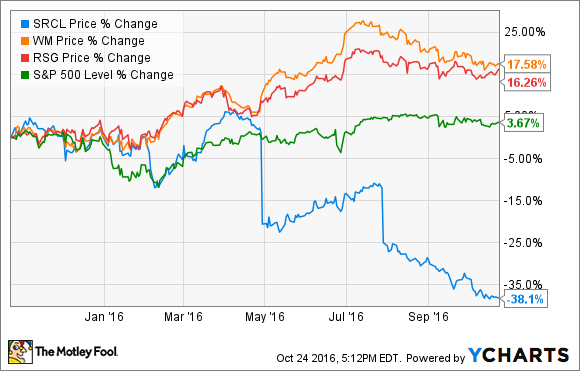 The company reported earnings after the market closed on Oct. 27. Here are three things investors should know.

Stericycle was doing just fine -- better than fine -- until late 2015. Before that, its performance over the past decade was nothing short of stellar: 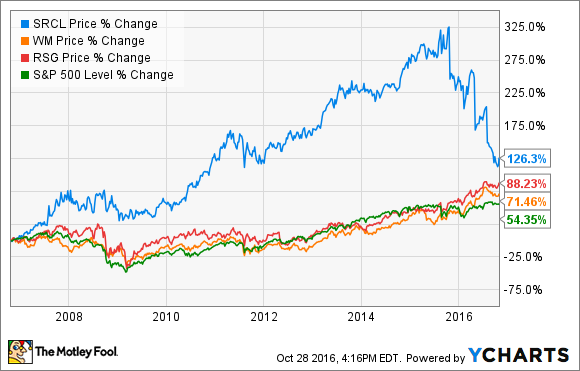 Even after a disastrous year, the stock has still handily beaten the market over the past 10 years. But much of that growth was through an aggressive acquisition strategy -- the company has made more than 400 acquisitions since 1993, or an average of about 17 per year. At first, these were other medical-waste companies, but then Stericycle began branching out and buying up other waste-related businesses, including hazardous-waste companies. Perhaps the coup de grace was the $2.3 billion purchase of document destroyer Shred-It in 2015.

These acquisitions were bold, but they ran up the company's debt load and got it involved in business areas outside its realm of expertise. An earnings miss in Q3 2015 started the stock's slide. The slide was accelerated by another miss in Q1 2016 and a one-two punch of lowered 2016 guidance and the report of accounting irregularities in July 2016.

Stericycle needed to stop the bleeding this quarter, and it managed to do so, posting results that beat expectations. Revenue, adjusted earnings, and margins all improved on a year-over-year basis, with adjusted earnings up 7.8%. However, higher operating costs and general expenses did lead to a decline in GAAP earnings.

The company has taken on a mountain of long-term debt -- more than $3 billion as of Q2 -- to finance its acquisitions, but surprisingly, this hasn't thrown many of its debt ratios too far out of line from other waste haulers: 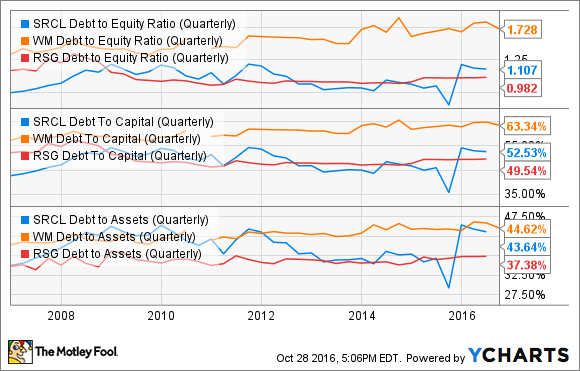 Stericycle (the blue line) sits comfortably between Waste Management's yellow line and Republic Services' red line. Still, $3 billion of debt is a significant chunk of change, particularly when the company has only about $40 million in cash on hand. And the difference between Stericycle and the others is stark when we look at debt compared to EBITDA: 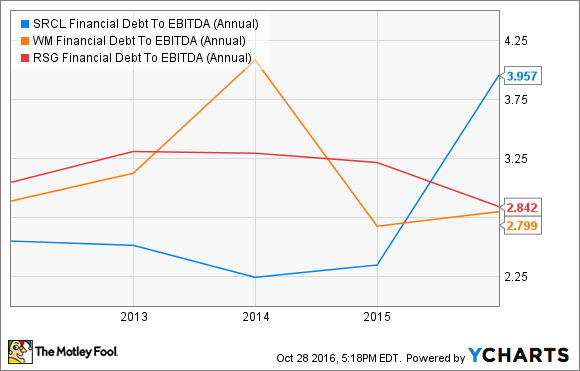 Yikes! Stericycle has nearly four times as much debt as it has operational earnings. Now, that's not an insurmountable obstacle -- you'll note Waste Management had an even higher ratio at the beginning of 2014 that has since gone down. But it should be of concern to investors.

Stericycle has paid down its debt a bit in Q3; it's now just below the $3 billion mark, at $2.9 billion. But the company hasn't stopped its acquisitive ways. In Q3, it closed 10 acquisitions, six domestic and four international. And according to COO Brent Arnold, there are plenty more potential acquisitions on the company's plate. "Our worldwide acquisition pool remains robust, with well over $100 million in annualized revenues and multiple geographies and lines of business," he said on the Q3 earnings call.

Investors should keep a close eye on Stericycle's debt, particularly as it compares to the company's earnings. If the company's debt load gets too high, it could severely affect not only the company's ability to make further acquisitions, but also the company's overall finances.

It's just one quarter

Yes, Stericycle beat expectations this quarter. But that doesn't mean the company isn't facing its fair share of challenges.

CEO Charlie Alutto noted on the earnings call that the company's revenue was being negatively affected by "pricing pressure and softness in the manufacturing and industrial market." Later in the call, management estimated $10 million to $15 million in headwinds for the second half of 2016, and "plus or minus $40 million" in headwinds for 2017. Foreign exchange rates and weak hazardous waste volumes are contributing to the problem.

This probably explains why the company isn't predicting much growth -- if any -- in EPS for 2017. Alutto reiterated the company's 2016 adjusted EPS guidance of $4.74 to $4.76, which includes "the benefit of our ongoing strategy to repurchase the mandatory preferred convertible shares" issued as part of the Shred-It purchase. However, for 2017, Alutto is predicting only $4.57 to $4.77 in EPS, which means that unless the company comes in at the top end of its 2017 guidance, it's likely to see EPS declines in 2017. This should raise a red flag for potential investors.

If I had to summarize the problems Stericycle is having, I'd call them "growing pains." The company has made a lot of strides forward in consolidating a fragmented medical waste-disposal industry, and now it's struggling to digest new acquisitions outside its realm of expertise, such as the Shred-It acquisition. Meanwhile, economic factors outside its control aren't helping. Investors should be very cautious if they're thinking about buying in to the stock, even after its recent price drops. And existing investors should keep a close eye on the company's debt load; if it becomes untenable, it may be time to head for the exits.