Facebook's (NASDAQ:FB) mobile business seems to be hitting new milestones every month. The most recent is the fact that for the first time ever, Facebook has reached over 1 billion users that exclusively use the service on mobile devices. Last quarter, Facebook had 1.06 billion mobile-only monthly active users (MAUs) accessing the service from mobile devices. Technically, using just the Messenger mobile app also qualifies, which Facebook hasn't really started to monetize, but that shouldn't undermine its progress. 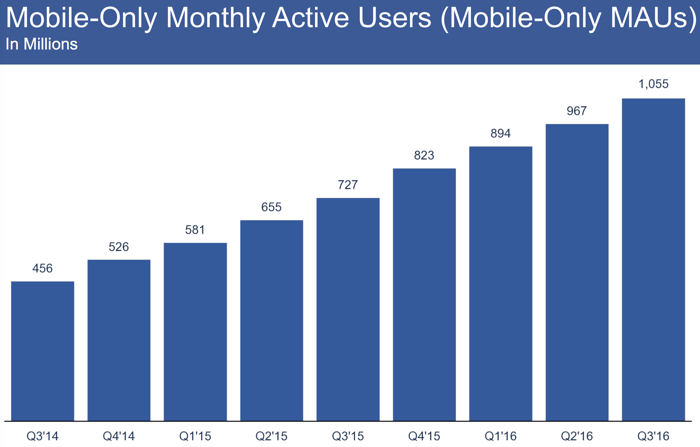 There are a number of different angles from which we can look at this data point. For starters, we can actually see a distinct and aggressive shift toward mobile-only usage, if we look at mobile-only MAUs relative to mobile MAUs (that also access Facebook on the desktop). 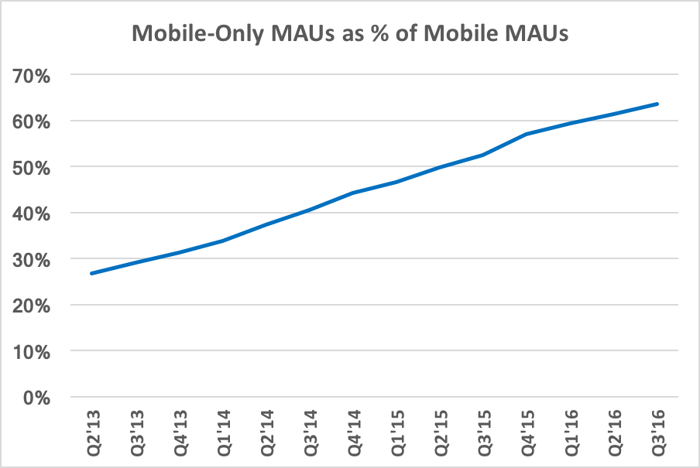 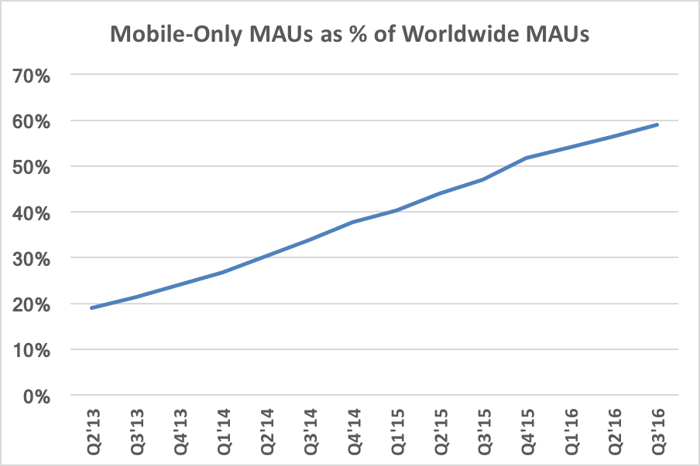 Any way you slice it, an increasing proportion of Facebook's user base is relying exclusively on mobile devices for their Facebooking needs, and it's unlikely that this trend will stop anytime soon. What's less clear is what the natural ceiling will be, since there will always be some level of desktop-based usage of the service. These high levels of mobile-only penetration underscore just how important it is for Facebook to continue executing well with mobile ads. The numbers speak for themselves; just look at Facebook's desktop and mobile businesses in absolute dollars.

Another disclosure that I would be particularly interested in would be a geographical breakdown of those mobile-only MAUs, much like Facebook breaks out its worldwide MAUs. However, Facebook doesn't provide this granular detail around its mobile-only MAUs. A geographical breakdown would be especially useful since Facebook's monetization rates vary wildly depending on the region. Advertising average revenue per user (ARPU) in the U.S. and Canada soared to break the $15 threshold last quarter, while ad ARPU in the rest of the world segment is just $1.20.

It's also true that emerging markets are where it's most likely that a mobile device will be the user's one and only way to get online. I would like to know how many of these mobile-only MAUs are concentrated in developing countries, because that would also give investors a better way to assess growth opportunities going forward as Facebook continues to improve monetization.