It seems that Sempra Energy (NYSE:SRE) has to keep navigating from one bad press moment to another. Just little more than a year ago it was the natural gas leaks at its Aliso Canyon facility. Now, the company had to announce that its Cameron liquefied natural gas (LNG) facility is facing significant delays. Even the fact that the company posted a huge gain this quarter thanks to a recent purchase wasn't enough to cheer investors up. Let's take a quick look at Sempra Energy's most recent results, what is going on with the Cameron LNG facility and whether it will have a big impact, and what this means for all of Sempra's long-term plans.

No, that isn't a typo. Sempra's GAAP earnings more than doubled on a sequential basis. It's not because the company grew its utility base that quick; instead, there were some large one-time gains. The largest of which was a $350 million equity remeasurement gain related to Sempra's Mexico business Ienova buying out its joint venture partner PEMEX's stake in a pipeline for $1.14 billion. There was also a one-time gain from the sale of its EnergySouth business. That's why adjusted earnings are much lower than GAAP earnings in this case.

Aside from the massive gain in Sempra's Mexico unit, the rest of the business produced incrementally better results. There were marginal gains in its California utilities business thanks to regulated rate increases, which will be more apparent in Q4 and Q1 because of the seasonal nature of natural gas distribution. There was also some gains in its U.S. gas and power segment now that the REX pipeline is off the books, and some small operational gains with its renewable portfolio. 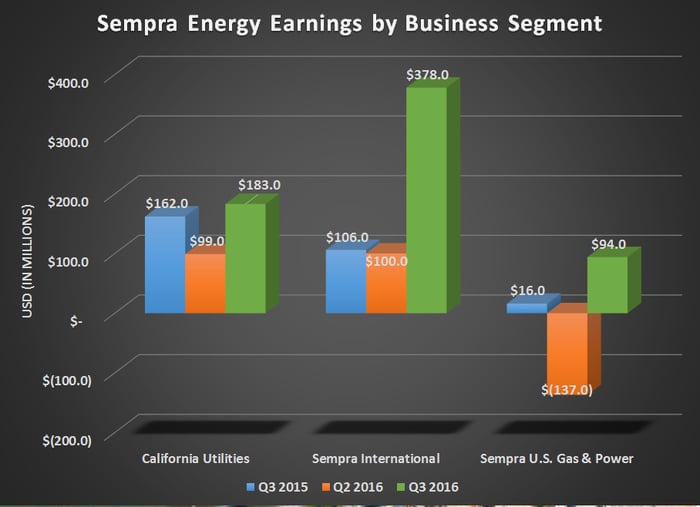 While the earnings and operational-related part of the business was pretty run of the mill and overall positive, the news about its Cameron LNG facility was a real downer. Management announced that its engineering, procurement, and construction contractor, Chicago Bridge & Iron Company (NYSE:CBI), notified Sempra via its earnings conference call that it is facing delays and that it could delay full operations of the facility for an entire year. Sempra's management has stated that the delay was related to flooding at one of its fabrication facilities. Sempra estimates that delayed earnings from the project will be recovered from higher tariff rates once completed and won't change the net present value of the facility for the company, but the first sign of delays is never good. Full completion is now being pushed out to mid-2019.

The other less-than-great news for Cameron is that one of the joint venture partners isn't too keen on the idea of expansion. This is troublesome for Sempra because it would like to go ahead with the expansion, but the green light for the project requires a unanimous consent from all equity partners.

On the good side of things, though, management did say it is negotiating for a 50% working interest in the $6.5 billion Southern Peru pipeline project. Management wouldn't give any further details as the negotiation is ongoing. It does seem a bit strange to announce this before securing the acquisition, though. Perhaps it was a way of making the news about Cameron a little easier to swallow.

When asked whether the Cameron LNG delays was just the contractor being conservative and potentially being able to get back on track, or if this is a precursor to further delays down the road, CEO Debra Reed had this to say:

What I will say, though, is that the project is about 57% complete in total and all the materials are on-site for the construction. We were there last week. All of the cooling units were on Train 1. I mean, there's been a lot of construction progress. And so it's not like early -- it's not really early on, I would say, in the progress of the project. And it's the contractor's responsibility when they feel that there's a potential for a delay to give us this notification, and that's what they did just last week. As I said, all we know is that on their call, they said that there was rain at the site and at their fabrication facility that caused some flooding. We don't know what the actual cause of the delay is. And until we get in and have the chance to have them explain to us what they're looking at and then look at what the potential is to mitigate some of those, it's really hard for us to assess the likelihood of it getting better through those discussions, but we'll be making every effort to have that occur.

There are a lot of irons in the fire for Sempra right now between the Cameron LNG facility, its other organic capital spending programs, and the continued bidding on commissioned energy projects in Mexico via its Ienova subsidiary, which means Sempra is spending a lot of money right now. Now we can throw on top of that the possibility that it will be buying into another multibillion dollar pipeline in Peru and you get more than $20 billion in capital spending between now and 2020.

Fortunately, Sempra's earnings have been holding up relatively well to fund these projects, because taking on all this additional work has been a bit of a burden on the balance sheet. This time last year, management was exploring the possibility of spinning off some assets into a master limited partnership to raise cash, but that has been tabled and there hasn't been much mention of that lately. If the company plans to grow as ambitiously as its plans show, it is going to have to come up with some cash pretty soon.