Himax Technologies (NASDAQ:HIMX) is scheduled to report third-quarter earnings on Thursday morning. During the previous quarter, the company showed a rebound in its core display driver business and promising growth from its non-driver emerging technology division. Here's what to look for when the Taiwan-based company reports.

After notching strong growth in the top and bottom lines through 2014, the trend started to reverse for Himax in 2015. Smartphone and tablet sales in China especially helped increase the demand for the company's small and medium-sized display drivers, but a slowdown in sales in 2015 led to the off year.

The trend has reversed once again, though, with business recovering on the back of a rebound in Chinese smartphone and tablet sales. The uptick in demand from end manufacturers of devices means orders for Himax's components also increase. 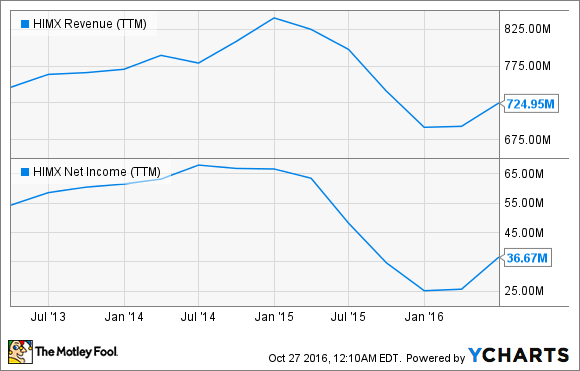 Through the summer, Himax reported that newer revenue sources outside of phones and tablets were also contributing to the rebound in the display driver segments. Ultra-high-definition 4K TVs, which have been in the U.S. for a couple of years now, are just starting to gain traction in markets such as China. Himax has seen 24% year-over-year growth in large display drivers as a result.

The automotive industry has also become the largest growth contributor in the small and medium-sized display driver segment. What was once reserved for luxury vehicles is now showing up in an increasing number of new cars and trucks: a high-definition display in the dash. The company sees demand from the auto industry staying strong in the years to come.

Investors will want to watch the numbers in the lastest report.

A bet that display drivers are not the future

The most exciting development for Himax shareholders has been progress from the company's non-display driver division. Non-display business was a small fraction of revenue in the not-too-distant past. During the last quarter, the segment grew 34% year over year and now generates 21% of Himax's total revenue.

The portfolio of non-display driver technology consists of timing and touch display controllers, image sensors, and augmented and virtual reality. Himax reported barely being able to keep up with the influx of new orders for the back half of 2016.

To keep up with the long-term potential of the division, the company is investing to expand operations. However, as a result of the backlog, investors are looking for only high-single-digit sequential growth. Year-over-year growth from non-drivers is still expected to be in the double digits by year's end.

Get ready for Thursday

Headed into third-quarter results, Himax stock has stumbled, mainly because of analyst downgrades at the end of September. News broke that Microsoft's HoloLens augmented-reality device is seeing sales declines as the company continues to work out the bugs. Himax is a key supplier for parts used in the device's assembly.

Wild gyrations in stock price are typical for Himax. 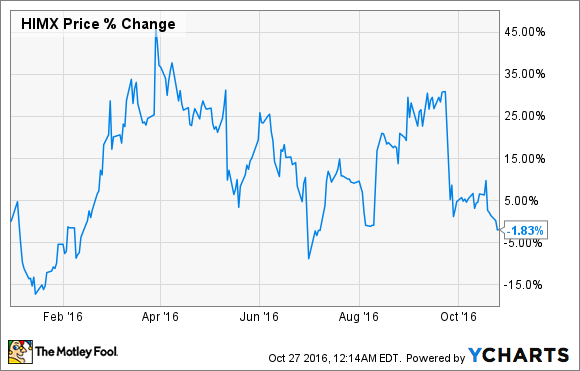 When the company releases earnings, investors will want to look for signs that the well-established display business is continuing to rebound, especially from orders coming out of China. Though doubt has been cast on the non-driver business as of late, it's worth noting the company already said it expected a slowdown in growth this quarter from its emerging technology unit.