But in October there were silver linings starting to appear on the many clouds the industry faces. That's why Alliance Resource Partners advanced 12%, Cloud Peak rose 13%, and Alliance Holdings jumped by 16%.

The big story for this trio was rising coal prices. After years of declines, thermal coal prices started to pick up a bit toward the end of September in the Illinois Basin, where Alliance is focused, and in the Powder River Basin, where Cloud Peak operates. That uptick held through October. 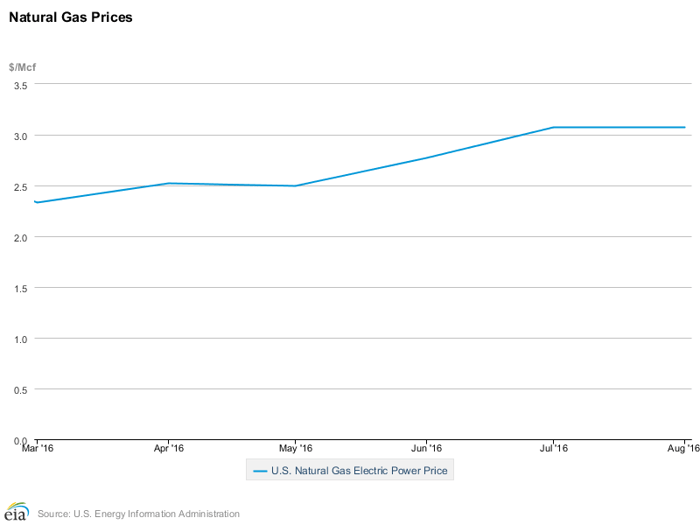 But this improvement hasn't occurred in a vacuum. On the other side is a rise in the price of natural gas, which has been displacing coal because it burns cleaner, but also because it's been trading at historically low prices. Cheaper and cleaner is hard for coal to fight. That appears to be changing, however, with rising gas prices making coal look increasingly desirable to utility customers, at least on a cost basis.

Frankly, it's just too soon to call a turn. For example, Alliance Resource Partners noted the positives during its late October third-quarter conference call, but it made sure to temper the excitement a little. The partnership noted that coal prices were still lower year over year even though they had lifted off recent lows. And while demand picked up, Alliance isn't yet ready to start reopening shuttered mines, suggesting that more improvement in pricing and demand is needed before that will happen.

That said, the miner is striking while the iron is hot. It's been inking more coal deals (out as far as 2020) as prices rise, including some export deals that will increase shipments over the next six months or so. But for investors, the real takeaway from the company's comments is that the coal industry isn't out of the woods just yet.

For conservative investors, coal and the many headwinds it faces are probably risks best avoided. For more aggressive types, the recent trends could be an indication that the coal market is starting to right itself. Just be prepared for more ups and downs if you step in here since a month or so of better prices really doesn't constitute a new uptrend just yet.