Editor's Note: This article has been revised to reflect that there were nerve damage reports in patients treated with revusiran in a phase 2 study, not patisiran as originally reported. The Motley Fool regrets the error.

Shares of RNA interference hopeful Alnylam Pharmaceuticals, Inc. (NASDAQ:ALNY) took a 47.5% leap downward in October, according to data from S&P Global Market Intelligence. Bad news from data monitors caused the clinical-stage biotech to throw in the towel for a candidate in late-stage development. 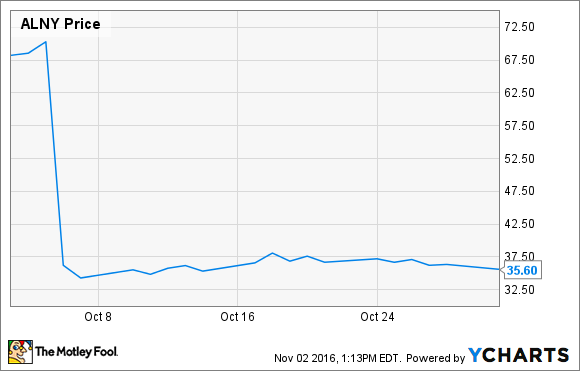 Alnylam was founded a little over 14 years ago. It doesn't have anything to sell yet, and last month's developments suggest it'll be stuck in the pre-commercial stage for even longer than expected.

The biotech had two candidates in phase 3 trials for the treatment of inherited disorders caused by misfolded clumps of transthyretin, a vital protein that transports a thyroid hormone and vitamin A throughout the body. Alnylam halted development of revusiran for the treatment of familial amyloid cardiomyopathy (FAC) when the independent data-monitoring committee assigned to its pivotal trial uncovered a disturbing trend: A higher number of patient deaths in the group receiving the experimental drug shattered its risk-to-benefit profile.

Recent reports of new or worsening nerve damage in patients treated with revusiran from a phase 2 study that was previously considered successful led independent data monitors to examine data from ongoing phase 3 studies with revusiran and patisiran.

For now, the data monitors recommended continuing patisiran's phase 3 FAP trial, and we can expect top-line data about halfway through next year. FAP affects about 10,000 patients worldwide, a group about one-fourth the size of the FAC population revusiran was aimed at.

The limited FAP population lacks effective treatment options, but patisiran might not be the first one available. Ionis Pharmaceuticals is shepherding IONIS-TTRrx through a phase 3 study for FAP in partnership with the big British pharma, GlaxoSmithKline.

Alnylam's potential competitors expect top-line results from the IONIS-TTRRx phase 3 FAP trial in the first half of next year, with a potential phase 3 study in FAC planned if the candidate's safety profile holds up.  Alnylam's resources are limited, which makes potential competition with Glaxo a daunting challenge. Many patients with FAP also exhibit FAC symptoms. If IONIS-TTRRx eventually earns green lights for both indications, commercializing patisiran would become even more difficult.