The food-maker's stock dipped after poor guidance in its third-quarter earnings report.

Shares of B&G Foods (BGS -0.46%) gave back 14% last month, according to data provided by S&P Global Market Intelligence, after the diversified food producer reported weak guidance in its third-quarter earnings report. As the chart below shows, the stock began falling in the run-up to the food-maker's Oct. 27 report and continued to slide after it. 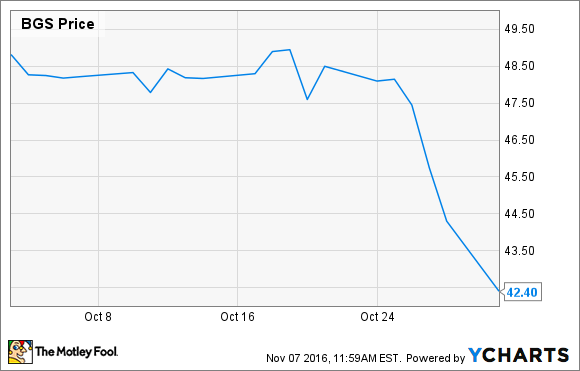 B&G's report for the quarter past was actually better than expected. Following its acquisition last November of Green Giant from General Mills (GIS -0.75%), the shelf-stable food producer said revenue jumped 49%, increasing to $318.2 million, and adjusted EPS improved 43%, to $0.56, topping estimates at $0.52. Adjusted net income soared 64%, outpacing earnings per share (EPS), which were weighed down by additional shares authorized for the purchase of Green Giant.

Falling sales in its base business stemmed from a combination of higher almond prices, general food deflation, and weakness in the syrup business due to a stronger dollar, which brought increased Canadian competition.

Going forward, B&G's revenue growth rate will moderate as it laps the Green Giant acquisition, which closed last November. In September, it acquired ACH Food Companies' spice and seasonings business, which includes the Spice Islands, Tone's, and Durkee brands, for $365 million. The move is the latest evidence of the company's ongoing effort to grow through acquisition.

Even after October's setback, the stock has still outperformed the market this year, gaining 20%. The challenges in its legacy business look temporary, and with its growth-by-acquisition strategy and rewarding dividend yield, I'd expect the stock to continue to be a good play for income investors.