November's top stock should rise up from this fall. Image credit: Getty Images

Imagine this: a quickly growing company announces quarterly results. It blows them out of the water -- beating both its own and analysts' expectations. Furthermore, it forecasts revenue at or above where most were expecting for the fourth quarter. On the conference call, there's a lot of excitement.

I believe that disconnect presents a buying opportunity, and that's why I'll be buying shares of Paycom Solutions (NYSE:PAYC) when Foolish trading rules allow.

Most of us just assume our paychecks will be automatically deposited into our bank accounts every two weeks. We don't look behind the curtain to see all of the moving parts at work. Recently, Foolish co-founder David Gardner gave a thumbs-down CAPS call to the Fool's previous processor, Paychex (NASDAQ:PAYX).

Here's what he had to say:

"The team said PAYX's user interface was outdated and user-hostile. Fools struggled to log-in and even if they did, they had a hard time understanding their paychecks. The team couldn't customize things or build reports very easily."

In other words, the field is ripe for disruption. That's where Paycom comes in. While it didn't win the Fool's contract (that went to Namely), the company is changing much of the HR ecosystem for companies with between 50 and 2,000 employees. Paycom not only allows for a cloud-based payment system to thrive, but it also tackles reimbursements, scheduling, managing time-off, and even health-care compliance for employers that use its service.

There's a lot to like here, and it all starts at the top. CEO and founder Chad Richardson started Paycom in the late 1990s after seeing how inefficient the traditional players had become, and how slow they were to react to technological changes. He still owns 13.2% of shares outstanding, and his leadership team together controls just shy of 19% of shares. I like knowing that the leaders have so much of their skin in the game.

Furthermore, I think the people who really matter -- the everyday employees that enact Paycom's vision -- are pretty happy at the company as well, as it gets generally positive reviews on Glassdoor.com. 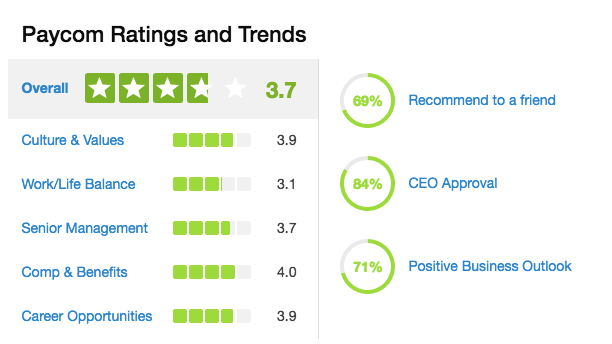 Of course, a company can't be run for the employees' benefit alone. There needs to be added value that Paycom's platform offers. For proof of that, I point both to the company's rapid revenue and customer account growth.

It's also worth noting that Paycom's customer retention rate -- for those who have been using the product for over three years -- has remained strong: 91% every year for the past three years.

But perhaps the most important part of this equation is the company's sustainable competitive advantage: its high switching costs.

No one wants to spend their precious time at work worrying about payroll...or any of the other things included in Paycom's HR domain. While it must be dealt with, rarely does such a focus do much to guarantee that a company will actually fulfill its mission.

To add to the headache, once a company is trained on a new platform, it can take a long time to retrain everyone on a new system. That's why Paycom's advantages are two-fold: (1) by integrating several HR functions on one platform, lots of time is saved; and (2) once a company becomes locked in, it would be loath to switch to a competitor unless service or price became significant issues.

While some might fret over the price tag of 54 times earnings -- which, no doubt, is expensive -- I'm comforted by the strength of this moat. Additionally, if Paycom hits its 2017 and 2018 EPS targets, it is trading for just 41 and 33 times those figures, respectively.

The key risk I'll be watching

While there will obviously be risks emerging from competition, there's another danger I want to address here. On Glassdoor, there was a particularly honest and thorough review that pointed out the biggest problem the company may face moving forward: that it is simply growing too fast to meet customer needs.

The reviewer wrote that, "As a sales rep...you are also required to set the system up for your clients...You are told that a Transition Specialist to help you through [it]...but they are so overwhelmed with their workload," that they can't do it all. To me, this means that management might be chasing growth to satisfy investors over the short-term, instead of focusing on creating a healthy company for the long-run.

Only time will tell which path management will choose; I'm certainly hoping for the latter. In the mean time, I'm comfortable opening a small starter position in Paycom to see how it all plays out.