It was a tough month for gold and silver miners in October. To put some numbers on that: McEwen Mining (NYSE: MUX) fell about 11.5%, AngloGold Ashanti (NYSE: AU) descended 13.7%, First Majestic Silver (NYSE: AG) dropped a painful 21.8%, Eldorado Gold (NYSE: EGO) declined 19.6%, and Sibanye Gold (NYSE: SBGL) lost a whopping 20.7%. Even streaming and royalty specialist Royal Gold (NASDAQ: RGLD) couldn't escape the pain, losing about 11% in October. In other words, it wasn't a pretty month for this sextet.

To be fair, the story at each of these precious metals companies is slightly different. For example, Sibanye has all-in sustaining costs, an industry measure of how much it costs to pull an ounce of gold out of the ground, of more than $1,000 per ounce. That's much higher than industry giant Barrick Gold, where all-in sustaining costs are the industry best in the $700-an-ounce range. Higher gold prices are far more important to Sibanye's ability to turn even a modest then they are to miners like Barrick with cheaper costs.

Eldorado Gold, meanwhile, is a company in transition. It recently completed the sale of Chinese assets with more sales to come in November, deals that should give the miner plenty of cash to invest in key growth projects. However, building and expanding mines costs a lot of money up front, without the benefit of revenue coming in the door; that makes such investments a high-risk endeavor, and Eldorado's investing plans stretch out over the next three years. AngloGold announced a new investment in October, a project with a six-year horizon.

Royal Gold, meanwhile, isn't actually a miner. It's more of a specialty finance company, providing cash up front for the right to buy gold and silver at reduced rates in the future. That said, it still generates revenues through the sale of precious metals, even if it doesn't dig them out of the ground. 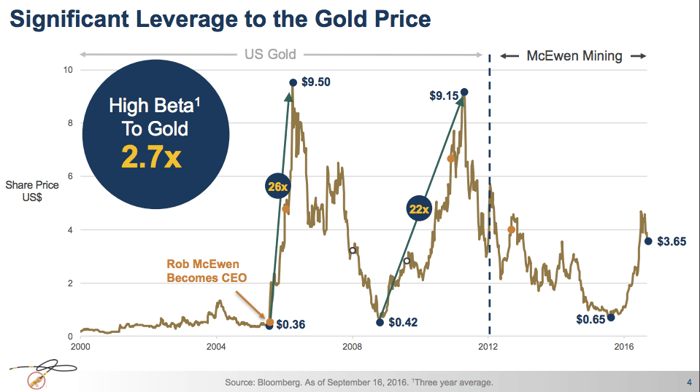 But McEwen probably best explains what happened last month on a larger scale. This particular miner highlights its volatility relative to gold, noting that its average three-year beta relative to gold is 2.7. That means that historically, when gold prices rose by 1%, McEwen went up 2.7%. Simplifying that a bit: For this precious-metals miner, and most others, gold and silver prices matter. (For reference, McEwen's all-in sustaining costs are also over $1,000 an ounce.)

Which brings us to the not-so-minor issue of gold and silver prices. Although the metals are much higher today than in mid-January, when the current precious-metals rally took hold, October wasn't a particularly good month. And if rising gold prices are a boon to McEwen's share price, and the prices of its peers, then falling precious metals prices are a potential bane to their stock prices. Gold ended October down roughly 3%, while silver shed around 5.5% of its value. Silver's greater decline helps explain why First Majestic Silver, which focuses on silver as its name implies, was the worst performer of the group, despite reporting record silver production in the third quarter.

Those gold and silver numbers, however, represent a recovery from lower levels in early October. Indeed, both precious metals entered the month in something of a nosedive: a disquieting development for investors that likely left a lingering sense of doubt through the rest of the month, despite the metals ticking slowly higher as October drew to a close.

With volatile precious-metals prices, it shouldn't come as too much of a surprise that this group of silver and gold companies didn't do very well in October. There were company-specific factors at each, of course, but the backdrop was the same: Falling gold and silver have an important impact on investor perception. The takeaway is that investing in precious-metals stocks comes with both operating risks and often-volatile commodity risks. You can't forget about either of these key dynamics, or you might get a nasty downside surprise.