Shares of Rite Aid Corporation (NYSE:RAD) a leading retail drugstore chain, fell 12.7% in October, ending the month at $6.71 per share, according to data from S&P Global Market Intelligence. It's been a year since Walgreens Boots Alliance (NASDAQ:WBA) agreed to pay $9.00 for each of Rite Aid's outstanding shares, and investors have reasons to worry the deal won't go through. 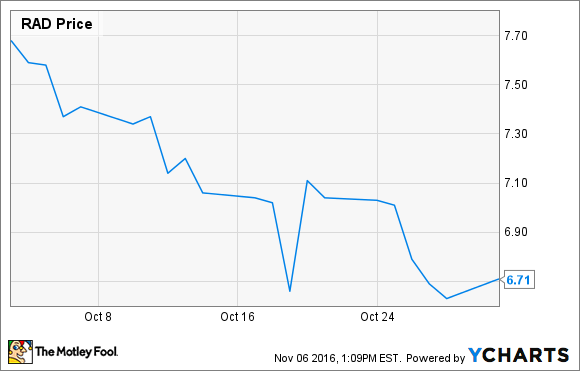 In October 2015, Walgreens offered Rite Aid $9.00 cash for each common share outstanding. Including debt, the deal , which was valued at about $17.2 billion, would create a gigantic retail drugstore chain of roughly 12,700 stores, if all existing locations were kept open.

Unfortunately for both parties, the Federal Trade Commission (FTC) insists the pair shed between 500 and 1,000 stores before it will allow the transaction to take place. Although Walgreens Boots Alliance claims it can realize about $1 billion in annual cost saving synergies despite the divestitures, finding a buyer might not be that to be easy. Kroger expressed interest in buying some stores from Rite Aid, but shied away last month after the FTC told the supermarket chain it wouldn't be allowed to close the purchased stores.

Even divesting up to 1,000 stores would lead to a combined entity with a retail footprint larger than that of market leader CVS Health, which boasted 9,686 stores at the end of the second quarter. If the deal completes, an overwhelming majority of retail drugstores in the U.S. would be owned by just two players, which suggests the FTC isn't about to bend on its terms.

It seems Rite Aid and Walgreens are running out of options. News that Kroger won't be able to easily fold acquired stores into its supermarket operations followed reports of fading interest from big private equity players in September.

Under the terms of the merger agreement, Rite Aid would have to pay about $370 million to Walgreens Boots Alliance if it finds another buyer, which doesn't seem likely. Walgreens Boots Alliance, though, is on the hook for paying Rite Aid just $325 million if it can't get an approval under antitrust law. That works out to about 5% of the free cash flow Walgreens generated during its fiscal year ended August.

The pair extended the merger agreement end date from Oct. 27 to Jan. 27 of next year. If a buyer for the divested stores doesn't step up soon, Walgreens might have little choice but to walk away and pay the penalty.