People are angry and confused right now (and I'm not even talking about the election). There's been unprecedented backlash against Apple (NASDAQ:AAPL) over its decision to replace all ports on the new MacBook Pro with USB-C, which is a big ask since it requires Apple's large and loyal base of creative professionals to haul around a handful of dongles as part of their daily workflow. As a testament to the concern, this fan-made parody video has gone viral.

Well, the good news is that despite the controversy, demand for Apple's latest and greatest notebooks is soaring.

We already knew that Apple marketing chief Phil Schiller said that orders for the new MacBook Pro are already higher than any other prior notebook, so that's encouraging. But beyond taking his word for it, it's good to get some third-party data. Slice Intelligence, a third-party analytics company, says that the new MacBook Pro has already garnered over seven times the amount of revenue that the 12-inch MacBook did in April 2015.

Put another way, the new MacBook Pro has already generated nearly 80% of all revenue that the 12-inch MacBook has collected since launch, which also dwarfs the PC competition. 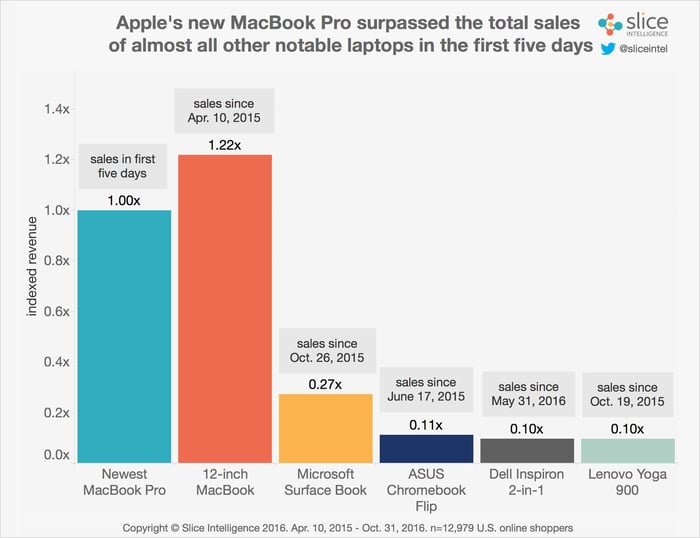 Unsurprisingly, there's also a strong correlation among buyers of the new MacBook Pro and early buyers of the first Apple Watch. Early adopters are always happy to try out the newest tech, independent of the form factor.

What we're seeing is a textbook case of a very vocal minority that don't speak for the majority. Relative to the masses, Apple's base of creative professionals is particularly vocal about the newfound inconvenience that they're facing. Considering the fact that there's a meaningful overlap between the media and creative professionals, this voice gets magnified dramatically. What really matters is whether or not Apple has put off the mainstream consumer, which Slice's data suggests it has not.

It's true that we're now seeing a blurring of the line between consumer and professional, the same line that Steve Jobs famously demarcated when he came back to Apple. If you were to ignore branding and model names when looking at Apple's laptop lineup, it wouldn't be immediately clear which device is targeted at which segment.

This all comes at a time when Apple desperately needs a hit Mac product to reinvigorate Mac unit sales, which have underperformed the already-weak PC market for the past three consecutive quarters, implicitly losing market share in the process. Ignoring the vocal backlash, Apple may very well have produced exactly that.