Donald Trump made a fortune in real estate, but his Presidential win was bad news for real estate stocks.

Donald Trump has a net worth somewhere between $2.9 billion and $10 billion, most of which is tied up in physical real estate. One would think he'd advocate for his own interests as president. A Trump presidency should be very good for real estate owners, right?

On Trump's first day as president-elect, real estate stocks as measured by the Real Estate Select Sector SPDR Fund (XLRE -0.36%) are putting up the worst performance of any sector, declining by about 2% while the market as a whole is up about 1%. Some REITs are taking it particularly hard -- National Retail Properties (NNN 1.08%) and VEREIT (VER) are down by almost 5% in active trading today.

Getting trumped by interest rates

When Trump takes up residency in the White House, Republicans will also have control of the House and Senate. The consensus view is that the majority party will push for tax cuts with little to no offsetting cuts in spending.

To be clear, this isn't my personal opinion that I'm sharing with you. This is the consensus view of many analysts who study rates for a living. Right or wrong, the consensus is that Republican policies would stoke inflation and result in more government borrowing. 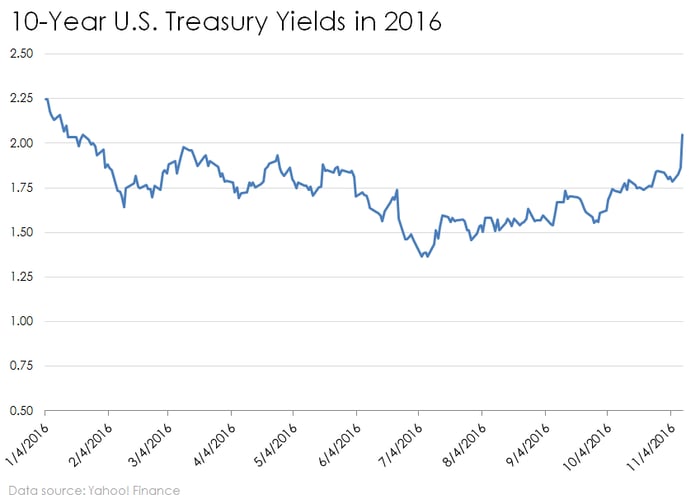 Markets are already beginning to price in an expected change in fiscal policy.

On Wednesday, the yield on 10-year U.S. government notes crossed 2% for the first time since January 2016. It may seem insignificant, but 10-year Treasury yields are now about 50% higher than the low struck in July 2016. That's a very big deal.

It's an especially big deal if you happen to be invested in real estate.

Why it matters for REITs

Investors buy real estate investment trusts (REITs) for their higher-than-average dividend yields. By law, REITs must distribute 90% of their earnings to shareholders, and in doing so, they avoid corporate taxation. As a result, the industry recently yielded about twice as much as the S&P 500.

But when it comes to income investments, REITs are just one of many choices. Income-seeking investors can invest in U.S. Treasuries and earn a risk-free return of about 2.05% per year for locking up their money for 10 years. Sure, the return isn't very high, but there isn't any risk. When you buy a U.S. Treasury security, you're lending money to a borrower that can quite literally print money to pay you back.

REITs are often low-risk investments relative to some other sectors. Triple-net REITs like National Retail Properties and VEREIT lock in their tenants with multi-year leases, and both companies recently disclosed that their average contract had more than a decade left before it would have to be renegotiated. In addition, VEREIT and National Retail Properties structure their leases so that the tenant is responsible for paying some or all of the property taxes, maintenance, and other expenses associated with the property.

In other words, VEREIT and National Retail Properties and other REITs are lumbering, mostly predictable businesses by design. They try to minimize risks at every turn so that they can pay predictable dividends to shareholders. But for as many safeguards that they build into their business models, REITs will never be as safe as U.S. Treasuries.

Investors expect to be paid more for the risk they take, and investors have typically priced real estate stocks so that their dividend yields are about 1.3 percentage points higher on average than the yields on 10-year U.S. Treasuries.

So when U.S. Treasury yields rise, dividend yields on REIT shares typically rise, too. For dividend yields to increase intraday, REIT stock prices must fall. And that's exactly what's happening today. Chalk it up to yet another unforeseen twist to 2016 elections.