Shares of cloud communications platform provider Twilio (NYSE:TWLO) tumbled 47% in October, according to data provided by S&P Global Market Intelligence. A secondary offering announced early in the month was the trigger, but the massive post-IPO gains for the stock, and the lofty valuation that resulted from those gains, was a major underlying factor.

Twilio went public in June at a price of $15 per share. The stock surged right out of the gate, reaching a high of about $71 per share in late September. At that price, the company's market capitalization was an eye-popping $6 billion. In the trailing-12-month period, Twilio generated just $247 million of revenue. The price-to-sales ratio topped 20 at its peak.

On Oct. 7, Twilio announced that it was selling $400 million worth of shares, with $50 million coming from the company itself and the rest coming from major shareholders. The stock reversed course on the news, beginning a decline that has yet to cease. 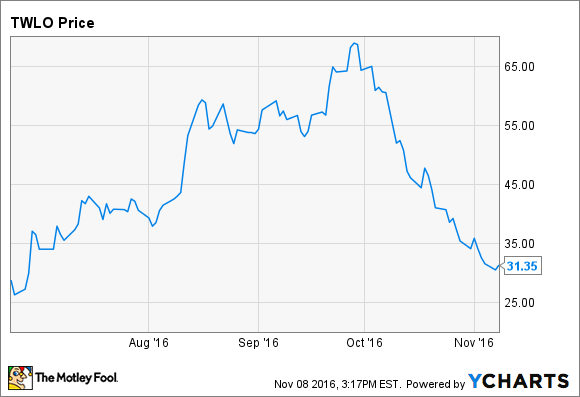 The stock offering may have triggered this dramatic decline, but it was the nosebleed valuation that was the real culprit. Twilio is growing fast, but justifying a valuation of more than 20 times sales requires wildly optimistic assumptions. During Twilio's latest quarter, results for which were announced in early November, revenue grew by 62% year over year. That's an impressive growth rate, but it's not out of the ordinary for small, fast-growing tech companies like Twilio.

Twilio isn't profitable by any measure, and its revenue growth is bound to slow as the company gets bigger. It was an exciting IPO for sure, but investors pushed the stock up far too high, well beyond what could be supported by the fundamentals. The sale of additional stock started the decline, but the root cause was unrealistic expectations driving the stock to unsustainable levels.

Twilio the company is doing just fine, gaining new customers and growing sales at an impressive pace. The stock price now better reflects the company's prospects, although with a price-to-sales ratio of 10, the market is still being fairly optimistic. Whether that optimism is justified remains to be seen.