Shares of Windstream Holdings, Inc.  (NASDAQ:WINMQ) fell 21.9% in October, according to data from S&P Global Market Intelligence. On the heels of an 18% gain in September, based on Windstream launching a bevy of new and expanded network services, the rally ran out of steam.

If Windstream investors were expecting a constant stream of service launches, early October left them disappointed. At that point, the company added fixed wireless data plans in 40 markets nationwide, and shares prices immediately stopped sliding. Call it a correction of overheated network-building expectations.

Going beyond the October period, Nov. 7 saw Windstream announcing an all-stock merger with fellow network access specialist EarthLink (NASDAQ: ELNK). The $1.1 billion deal is expected to close in the first half of 2017 and should increase Windstream's cash flows from the get-go. Including an early share price boost from rumors about the EarthLink deal, Windstream rose about 8% on the news. 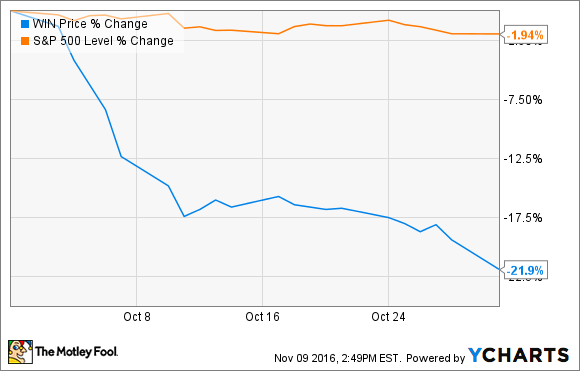 Windstream's stop-and-go stock chart can be frustrating to some investors, but that's life in Small-Cap City. The company's financial results are lumpy and unpredictable and share prices can move drastically on flimsy news reports.

The EarthLink deal will go some way toward curing these ills. This agreement will nearly double Windstream's market cap, though free cash flows are only rising by about 40% and EarthLink's annual revenue is only 18% of Windstream's tally. It's not a classic play on economies of scale, but more of a margin-widening move. Current shareholders should also realize that the printing of 93 million new Windstream shares to pay for EarthLink will dilute their current holdings by nearly 50%.

Despite the swift EarthLink boost, Windstream shares are still off to a strongly negative start in November.