Electronic Arts (NASDAQ:EA) released a new title in its Battlefield video game series in late October, and initial sales are so far exceeding those of past Battlefield titles. But with EA's stock still near all-time highs, the strong sales growth will need to continue to justify more share price appreciation. Here's what lies ahead during the important holiday shopping season.

Gamers continue to be enthralled with war-themed shootouts. Sales are rocketing even though the latest Battlefield 1 title comes on the heels of series releases nearly every year since 2002 from EA.

When the company released its last quarter's business results on Nov. 1, included in the data was a line item showing that Battlefield 1's first-week user base was double that of Battlefield 4's, the last successful installment in the franchise. One report compiled independently of EA shows the new title also outsold its last two predecessors combined upon release.

This is great news for Electronic Arts and its investors. The chart-topping sales of its new shooter ousted another EA title from the No. 1-selling slot, FIFA 17. The soccer video game had been the best-selling console game since early October.

What this means for investors is that EA is set to have a very busy winter season, capping off a very busy 2016. The last quarter, which ended on Sept. 30, brought in 10% more revenue than the same period last year. The release of Battlefield occurred on Oct. 21 and FIFA on Sept. 27, just a few days before the end of the reported time frame. With the new game sales getting off to a good start for both titles, company management was optimistic that another strong quarter of growth is in the works.

But competition is on the way

Whether the momentum holds remains to be seen, as several direct competitors in the first-person-shooter genre are entering the fray. One week after Battlefield 1 came another EA title, Titanfall 2. Despite positive reviews from the gaming community, sales so far have disappointed.

Part of the reason for the poor showing for Titanfall may be that it was slated for release between Battlefield and EA competitor Activision Blizzard's Call of Duty: Infinite Warfare. As a result, it looks as if EA's other big release in Titanfall is getting cannibalized by Battlefield as well as suffering at the hands of the genre's other big rival franchise in Call of Duty.

There's no shortage of shooters to choose from for those looking to pass time this winter in front of a screen, controller in hand. Even with the competition, though, EA upped its full-year guidance for revenue to $4.78 billion from previously stated $4.75 billion. Earnings-per-share guidance increased to $2.69 from $2.56.

Despite the positive news, I think the numbers for Battlefield 1 are already factored into the current valuation. The stock jumped after the last quarter and increased guidance for the full year was reported, and prices are still hovering around all-time highs. Valuation as measured by 12-month trailing price-to-earnings is on the high end at 22.7, and forward price-to-earnings is still elevated at 19.6. 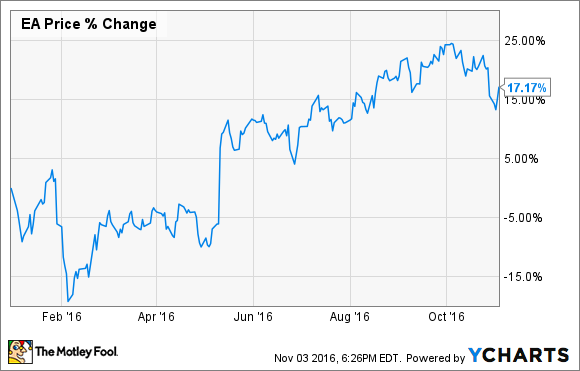 With one first-person-shooter title excelling and another struggling thus far during the current quarter, the numbers are already baked into share prices. Even though Battlefield 1 is off to a hot start, it alone isn't enough to justify paying current prices for Electronic Arts' stock.