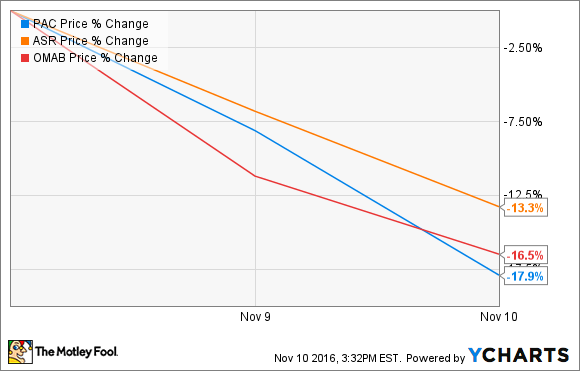 The reason Mexican airport stocks are selling off is that Donald Trump ran on an America-first policy platform, which could have a direct impact on U.S.-Mexico relations. Aside from his desire that the U.S. build a wall across the southern border with Mexico, his official policy platform on NAFTA is as follows:

Tell NAFTA partners that we intend to immediately renegotiate the terms of that agreement to get a better deal for our workers. If they don't agree to a renegotiation, we will submit notice that the U.S. intends to withdraw from the deal. Eliminate Mexico's one-side backdoor tariff through the VAT and end sweatshops in Mexico that undercut U.S. workers.

One of the potential ramifications of this stance is less air travel between the U.S. and Mexico, which would impact traffic at Mexico's airports. On top of that, domestic travel within Mexico could slow down if travelers begin to worry that their jobs are no longer safe should the U.S. pull out of NAFTA, or if companies move jobs back to the U.S. Further, increased volatility between the dollar and peso could impact dollar-denominated earnings for Mexican airport companies.

The market hates uncertainty, and right now there is a tremendous amount of it surrounding the future relationship between the U.S. and Mexico. That uncertainty alone could curb passenger traffic at Mexican airport companies over the next several months, until there's some clarification on how the two nations will get along in the future. This clouded future could lead to a turbulent ride over the next few months for investors in Grupo Aeroportuario del Pacifico.