Shares of II-VI (NASDAQ:IIVI) rose 14.3% in October, according to data from S&P Global Market Intelligence. The positive month started with an industrywide analyst upgrade, and was solidified by a strong earnings surprise three weeks later.

A rosy Piper Jaffray overview of the optical industry lifted all boats in that sector, including a 7% gain for this industrial laser specialist over the next two days. The analyst firm based this review on strong demand for high-speed coherent fiber receivers and rising gross margins across the optical industry.

II-VI followed up by proving Piper Jaffray right. Both earnings and sales increased by 30% year over year, beating analyst targets along the way. The strongest growth drivers for the quarter came from the communications-related photonics division, exactly as you would expect in light of Piper Jaffray's market analysis. 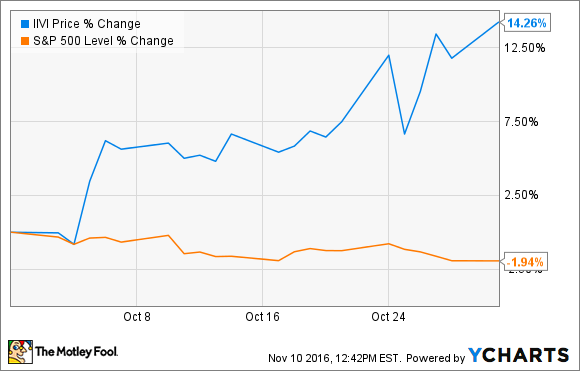 The optical communications sector is brewing up a fresh batch of strong results. Telecoms around the world are planning another round of technical standard updates based on either 4G Advanced or 5G standards. Meanwhile, consumers and their favorite entertainment services are finding new ways to consume extreme amounts of broadband data.

II-VI is not only poised to benefit from these macro trends, but is already taking full advantage of them. A long string of Street-beating reports has lifted shares 51% higher in 2016, including a 33% surge over the last three months alone. Even so, II-VI's stock is only trading at 27 times trailing earnings, which is entirely reasonable next to that 30% surge of proven earnings growth.

This bandwagon should keep running for the foreseeable future, and I don't think it's too late to jump aboard.