Please ensure Javascript is enabled for purposes of website accessibility
Log In Help Join The Motley Fool
Free Article Join Over 1 Million Premium Members And Get More In-Depth Stock Guidance and Research
By Brian Feroldi - Updated Nov 10, 2016 at 11:41AM

Shares jump in response to a strong third-quarter earnings report.

An upbeat third-quarter earnings report caused shares of Zeltiq Aesthetics (ZLTQ), a medical device company focused on non-invasive fat reduction procedures, to rise by 17% as of 10:58 a.m. EST on Thursday.

It was an almost-perfect report all around. Here's a look at the highlights:

If that wasn't good enough, management issued an upbeat forecast:

Given the solid quarterly results and upbeat guidance, it is no wonder that shares are jumping today.

Zeltiq's stock has been on a huge tear in 2016. It's up more than 40% year to date, which blows past the returns medical devices stocks in general, as measured by the iShares US Medical Devices ETF (IHI 0.56%). 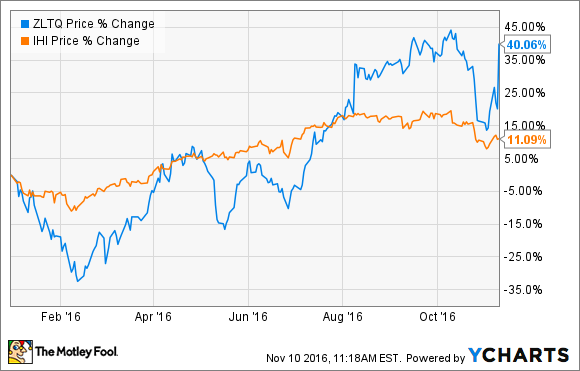 That huge outperformance makes sense when you consider that the company has grown its top line so rapidly. Better still, Zeltiq has succeeded with its efforts to convert that huge growth into profits.

I must admit that I've been skeptical of Zeltiq for some time. Like many others, I've been worried that CoolSculpting might just be a fad. However, results continue to prove that thesis wrong. If consumers keep warming up to the concept of freezing away stubborn fat cells, then I must admit that this company's future is looking bright.

CoolSculpting Stock Gets a Double Dose of Wall Street Love

Zeltiq Aesthetics Earnings: Looking Good on the Inside, Too