The skinny on the deal

British American's offer is to purchase the remaining 57.8% of Reynolds that it doesn't already own, for a cash and stock sum of $47 billion. The proposal values Reynolds' shares at $56.50 each, about 20% higher than share prices closed at on Oct. 20, the day before the offer was announced. Reynolds has stated that it's evaluating the offer.

BAT is the world's third-largest public seller of tobacco, and Reynolds is the sixth. A merger of the two companies would create a business with total sales of about $32 billion annually. If the deal happens, the company would surpass Philip Morris International and become the world's second-largest tobacco company, behind Imperial Brands.

In outlining reasons for wanting to merge, BAT cited wanting further exposure to the United States and access to Reynolds' portfolio of vaporized tobacco products and research and development. The company sees global operations and vaporized tobacco contributing to growth over the long term. BAT also sees the deal increasing profits and the dividend payout to shareholders within the first year of a merger, because of cost savings. 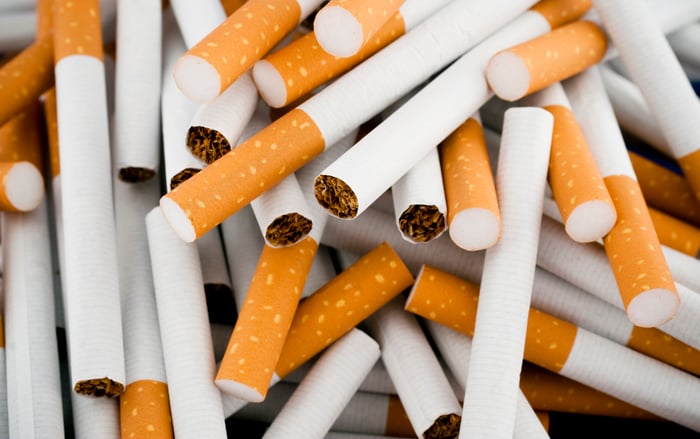 Before getting too excited, shareholders should consider the real reason Big Tobacco continues to consolidate into fewer but much larger companies. Cigarette use, which has long been on the rise in the developing world, has started to decline in recent years, and companies are looking to consolidation partly to help maintain the outsized price increases that have buoyed results.

From 2000 to 2014, the value of cigarette sales increased 121%, according to the Campaign for Tobacco-Free Kids, while, over that same time period, the total volume of cigarettes sold increased only 8%. That implies a more than doubling in price for a pack of cigarettes in the last decade and a half, even before including the taxes that regulators have increasingly favored putting on tobacco products.

Those price increases have been good news for cigarette companies, but global consumption last year actually notched a 2.1% decrease, according to Euromonitor International. Stricter regulations and taxes, greater awareness of health risks, and higher prices have started to curb the increase of new users and has even motivated some to quit, thus cutting into sales for tobacco companies. Even China -- where smokers had been making up for slower growth in other parts of the world -- showed a surprise fall in cigarette shipments last year.

In its third quarter, Reynolds reported a decrease in cigarette shipments of 1.6% and a decrease of 1.8% year to date. Even British American has struggled, with shipments increasing only 2% so far this year, even though the company has access to potentially high-growth markets such as Eastern Europe and Asia. Despite the volume of cigarette usage going down or slowing, both companies showed top-line revenue growth on the back of price increases passed on to smokers.

To support higher prices offsetting decreasing usage, the industry has been consolidating into fewer players. For example, Reynolds made a purchase of its own over the summer of 2015 when it acquired U.S. tobacco rival Lorillard.

Big Tobacco is seeing its appeal as an investment begin to tarnish, even when excluding moral considerations. Slowdowns in consumption growth, and even declines in some parts of the world, make the industry difficult to get excited about.

The latest merger proposal between Reynolds American and British American Tobacco amounts to nothing more than a large industry player fighting back against a stagnating user base.