Cameco Corporation (NYSE:CCJ) is the world's largest publicly traded uranium miner. If you want to make an investment in the uranium space, this is among the best ways to do it. But before you even consider jumping in here, you need to understand a couple of key numbers -- and they all tie back to Asia. 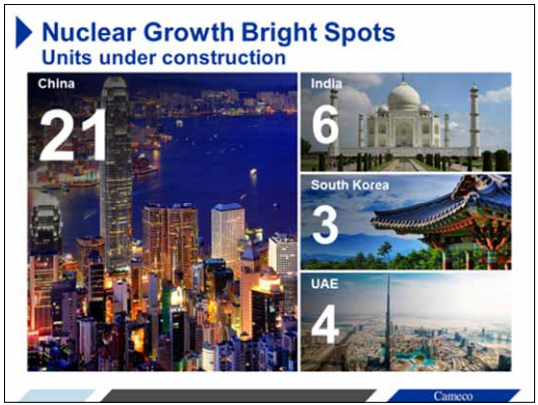 Some countries where nuclear power is getting bigger. Image source: Cameco Corporation.

The future of power

When you read through Cameco's investor presentation, you'll find a lot of positive information about the future of uranium. That's what the company mines for, so it's understandable that it would present the industry's best stats to investors. Some of the fun facts you'll find include the expectation for electric demand growth of more than 50% between 2013 and 2035, more nuclear reactors expected to be built than decommissioned between 2016 and 2025, and, based on currently anticipated supply/demand dynamics, not enough uranium to meet demand in about a decade's time.

If you're looking at uranium, those are stats you should like to see, even though you need to take them with a grain of salt since a uranium miner is presenting them. But add in the fact that nuclear power plants don't emit carbon, and there really does appear to be some future for the power source. Only there's one more thing you'll notice about Cameco's presentation -- it talks an awful lot about Asia.

The company devotes several pages of its PowerPoint to Japan, India, and, most notably, China. There's a good reason for this, given that Japan is a big consumer of uranium and is only now starting to reboot its nuclear fleet after a total shutdown following the Fukushima disaster. Meanwhile, India and China are two of the countries with the most aggressive building plans on the nuclear front. South Korea also gets a brief mention, since it's currently building three reactors. (India and China are building six and 21, respectively.) 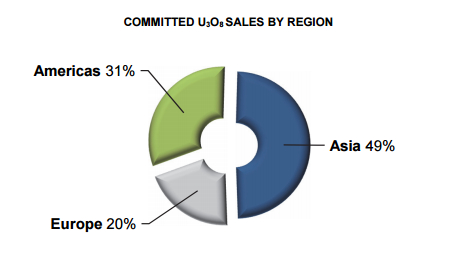 What doesn't get mentioned

Now juxtapose that against the fact that Asia made up 49% of the company's uranium sales in 2015 and 29% of its services revenues. Putting that into numbers, roughly $915 million of Cameco's uranium sales come out of Asia and the miner's uranium services business got about $95 million from the region. In other words, a little over $1 billion in revenue is tied directly to Asia. 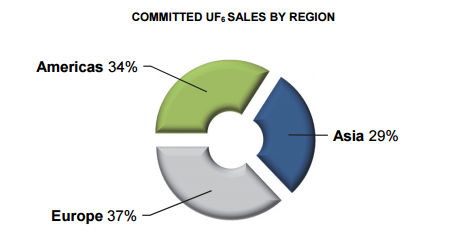 Clearly being so reliant on Asia is a notable issue. And things can change quickly, as Japan's decision to shut down all of its nuclear fleet following the Fukushima disaster shows. If such an event were to take place in China, which is building more reactors than any other nation on Earth, it could be a big problem for Cameco. For example, a material building slow down in China in the near term would further upset the already troubling supply/demand picture that exists today and potentially upend the long-term picture that Cameco is building its business around.

If you're looking at Cameco, there's no way to hide the fact that Asia is a key factor in the company's future. It's why management spends so much time talking about the region. And if you're investing in Cameco or thinking about it, you need to spend some time considering what that means for your investment thesis. If you don't, you'll be missing a big piece of the Cameco puzzle.