As a company with large business segments in both the U.S. and the U.K., it's not too surprising that National Grid's (NYSE:NGG) first-half results of 2016 were drastically impacted by currency fluctuations as the U.S. dollar and British pound have been on a bit of a wild ride this year. Looking beyond these forex changes, though, National Grid continued to deliver solid results across the board.

Here's a quick snapshot of National Grid's first-half results as well as an update on its two biggest business concerns: rate hikes for its U.S. business, and preparing its U.K. gas distribution business for a sale in the near future.

*in millions, except per-share data. National Grid results are reported in GBP and were converted to USD at a rate of 1GBP=1.26USD. 1 US ADR = 5 common shares of NGG. YOY = year over year. Data source: National Grid earnings release.

One thing to keep in mind when looking at these results is that there has been a lot of currency fluctuation over the past year, and some of the changes in revenue and profits are a reflection of those changes. According to management, operational profits were up 1% compared to this time last year on a constant currency basis.

Another thing to consider is that the large drop in after tax profits is due to some large exceptional items, the largest of which was a $904 million debt redemption cost related to separation of the U.K. gas distribution business. After adjusting for these costs and other considerations, after tax profits and earning per ADR came in at $1.34 billion and $1.77, respectively. 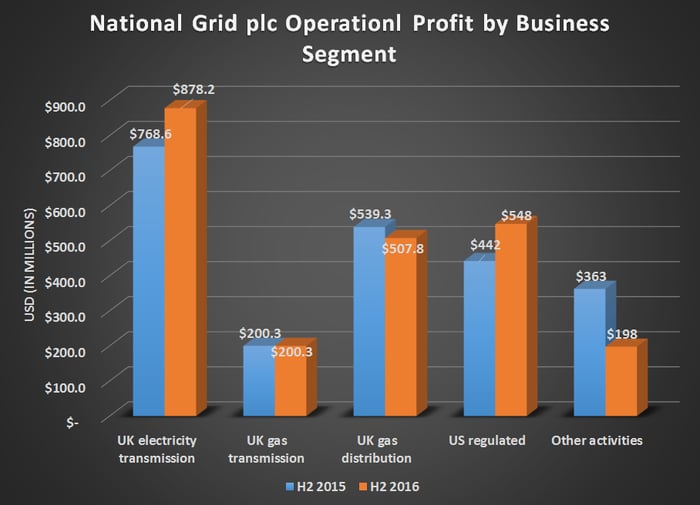 Much of National Grid's strong performance this past quarter was in its U.K. electricity distribution, which benefited from a rate hike and lower costs, and its U.S. regulated business. However, many of the U.S. business gains came from favorable currency movements. On a constant currency basis, operational profits were lower from write offs, higher healthcare costs, and increased vegetation management expenses.

What happened with National Grid this half-year?

We have delivered good results and made significant progress on key priorities while continuing to deliver a safe and reliable service to our customers in the UK and the US. First half earnings per share were in line with a strong prior year, with our regulated businesses delivering a solid performance.

In the US we received a positive outcome for our Massachusetts rate filing and are in the final stages of agreeing updated rates for our downstate New York gas businesses. Once agreed, around 40% of our US business will be operating under new agreements which will enable us to improve future returns in the US. In the UK the proposed sale of our gas distribution business is on track with separation activity in the final stages.

Looking further out we are focused on evolving National Grid to enable us to play a leading role in shaping the future of energy networks.

The combination of rate increases and high levels of capital spending in the U.S. should bode well for the company in the coming years. As management has said in the past, there are much less growth opportunities in the U.K. and most of its future organic growth will come in the U.S.

Now that the separation of the U.K. gas distribution business is nearly complete, investors should expect to hear an announcement about the completed sale of the business before the next earnings report sometime in May of 2017. By that time, we will have a better idea of what management and the board will ultimately do with the profits from that sale.